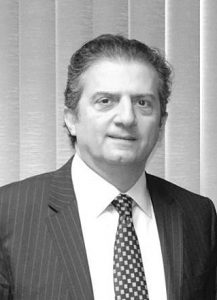 Berj Haroutunian, President of Vital Transportation, Inc. in Long Island City, NY was chosen by the Taxicab Limousine and Paratransit Association (TLPA) to be the 2017 “Limousine & Sedan Operator of the Year.”

Mr. Haroutunian joined Vital as a driver in 1984, when the company still ran taxis. The company soon transitioned into one of New York City’s first Black Car bases, and over the course of the next eight years, Mr. Haroutunian worked his way up through the ranks to become President, a position that he has held ever since.

“Haroutunian is a longtime leader of the transportation industry who understands what his clients and employees are looking for,” said TLPA CEO, Alfred LaGasse. “His commitment to adaptation, and his dedication to this industry and his community, are truly admirable.”

“Having been a member of the TLPA for almost 20 years, and seeing so many admirable, innovative and successful people win this award before me, I am deeply honored to be this year’s recipient,” Mr. Haroutunian said.

Haroutunian will accept his award in front of more than 1,000 industry professionals at the TLPA’s 99th Annual Convention & Trade Show on Oct. 9 at the Hyatt Regency Denver / Colorado Convention Center in Denver, Colorado.

Look for more information about Mr. Haroutunian, his award, and photos from the event in the next issue of Black Car News.