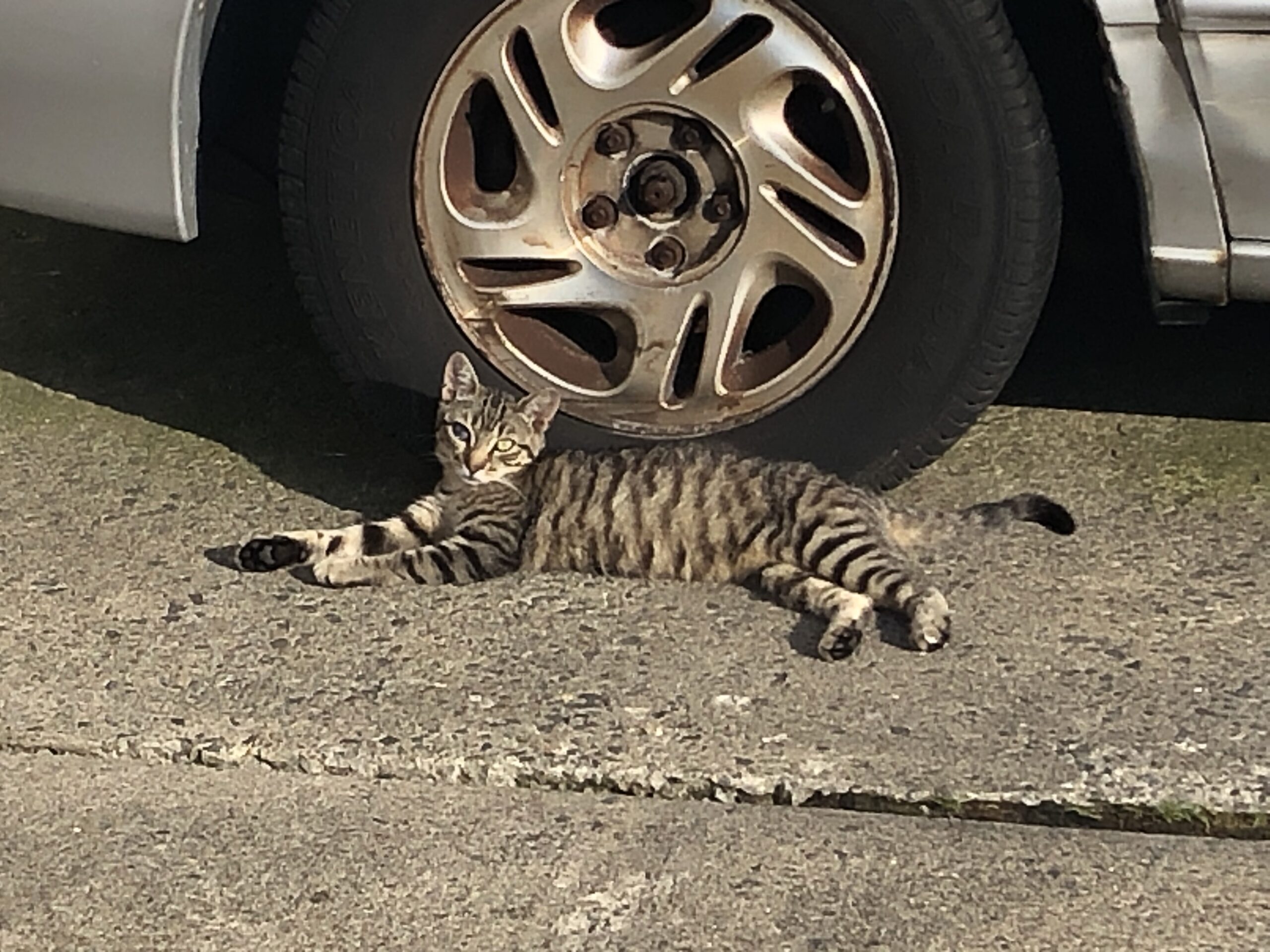 If you thought I was going to talk about Mary Trump’s book you are mistaken. This article is devoted to all of those who rescue animals, and particularly to those who rescue feral cats. Let’s face it, you don’t see homeless dogs wherever you look.

This month, I want to devote my column to an amazing rescuer by the name of Dean Kplosis from Staten Island Hope Animal Rescue. Then I’ll tell you a little about each of the cats in the photos.

The reason for borrowing the title from Mary Trump’s book is because it is so apropos. No matter how many cats or kittens’ rescuers and animal lovers like myself help, it’s never enough. The needs and requests for help are endless. As I discussed last month, kitten season comes back with a gusto every year.

As for my own efforts, I could never do what I do if not for Dean’s help. He is an amazing man who feeds 11 feral cat colonies six nights a week. And he helps countless others in so many ways. He’s a trapper; he works with fosters; he gets cats and kittens adopted; and he works full-time.

Some nights when I speak with him his physical exhaustion is trumped only by his mental exhaustion. He wants to do so much more but there is only so much any person can do. I know that I could not do half of what I do without Dean’s support, and more recently without the amazing support of NorthShore. God bless you Dean and thank you. And God bless you NorthShore and thank you also. I’m am so indebted to you, Dean and to the amazing NorthShore staff and Doctors.

Regarding the pictures, if you look at the picture of the orange tabby, it is owned by a lovely Russian woman who doesn’t speak much English. She loves animals and in Russia she used to pick up cats and dogs on the streets. She then treated them and found them homes. But here, because she hasn’t been able to communicate well to take advantage of low-cost spay and neuter services, she has 21 cats and quite a few kittens. The orange tabby needed emergency surgery to save its life because of stillborn fetuses from a previous pregnancy and an early stage current pregnancy.

The cat was operated on by NorthShore and she’s doing great. NorthShore also took in six kittens for adoption so far, with some of the others too young to take away from their mothers. Most importantly, next I’ll be bringing in all of the adults to be spayed and neutered.

Regarding the second photo, if you read a previous article about a cat that needed to have his eye removed, the second photo is his sibling. The cats must have a genetic deficiently because three kittens from the same litter all had bad right eyes. The first had his eye removed and has since been adopted by NorthShore. Sadly, the second was hit by a car and died. And the third, the baby in the photo attached is in my home being socialized a bit before we embark on the next steps for him. 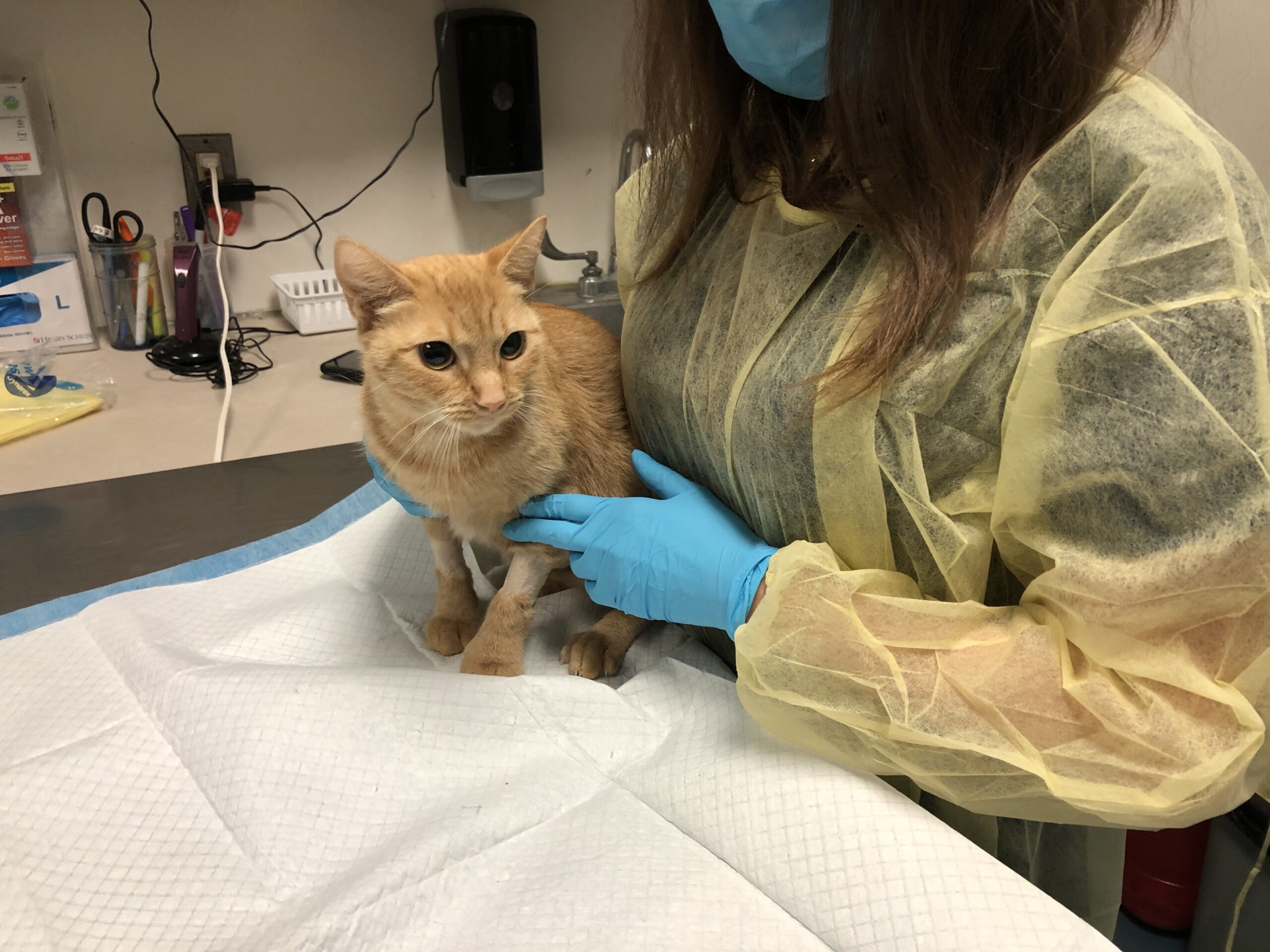 The third photo is a small black kitten that I brought in to be neutered in July, before returning him to be with his mother. In the last several months I noticed two adult cats near my house. Of course, I got them shelters and started feeding them. I even have a fan set up for them so they can be more comfortable in this heat. 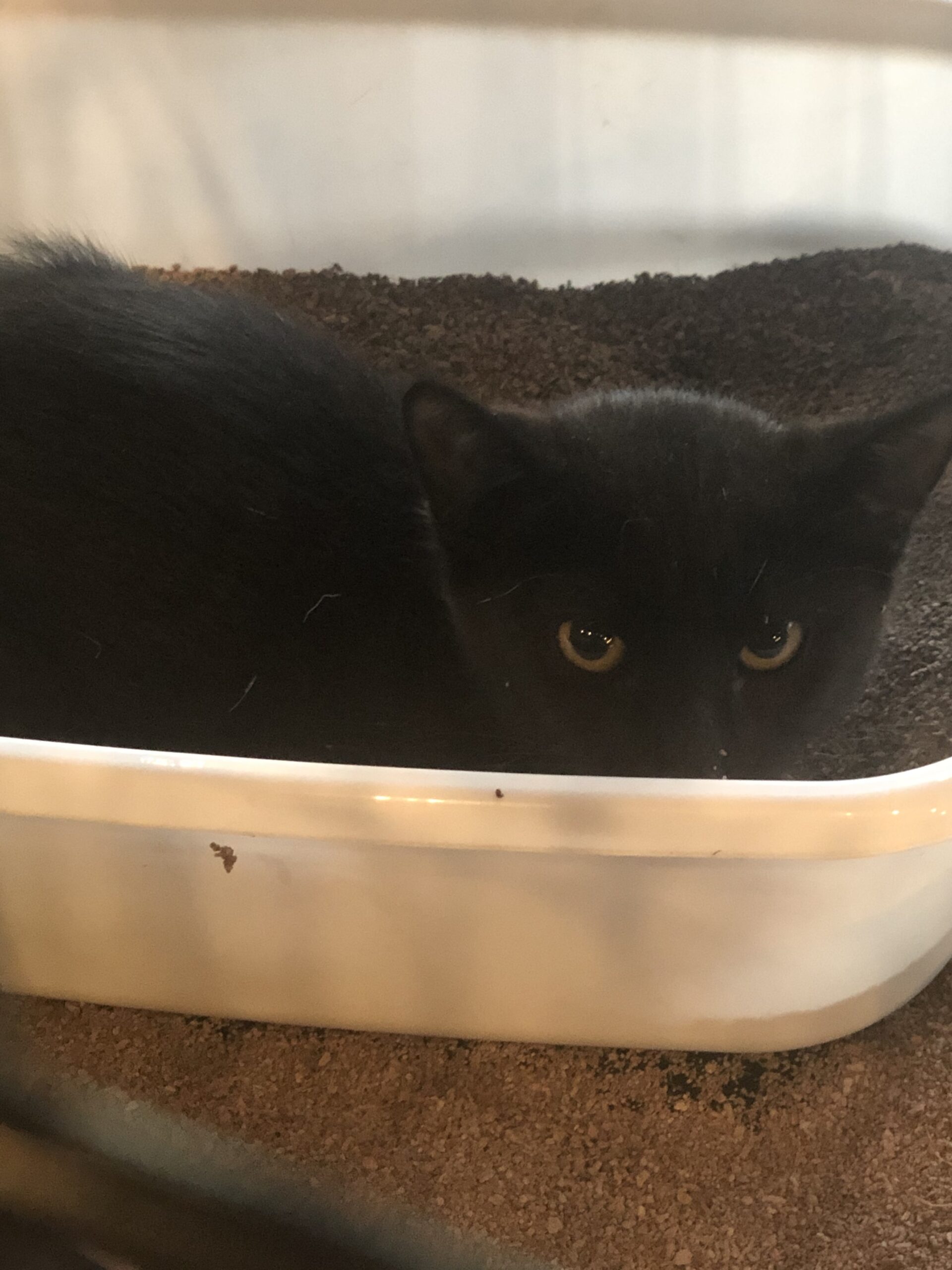 One cat was already fixed as it is eartipped (the universal sign of an altered feral cat). One centimeter (1 cm) is removed from the tip of the left ear in a straight-line cut. Eartips are readily visible from a distance, making it easy for caretakers, trappers and animal control personnel to immediately identify a cat as spayed or neutered.)

The second adult cat, who Dean will be trapping, suddenly showed up with a kitten, i.e. the black kitten above. Dean trapped the baby last night and while at first I thought we might not return it to the mother, the baby is miserable and I’m sure that the Mommy cat is too, so once the baby is neutered he will be returned.

I hope that over time all three of my four-legged neighbors will let me welcome them inside during inclement weather. Trust me when I say I am not looking for three more cats in addition to the two that I own, but they found me so what should I do? I just cannot turn my back on an animal in need. 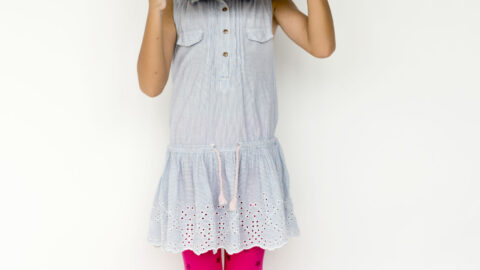 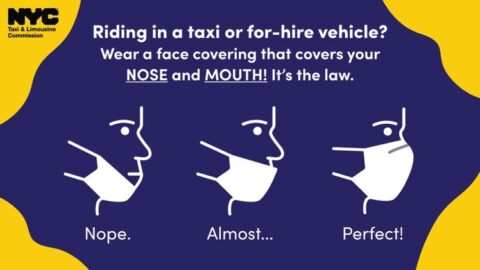 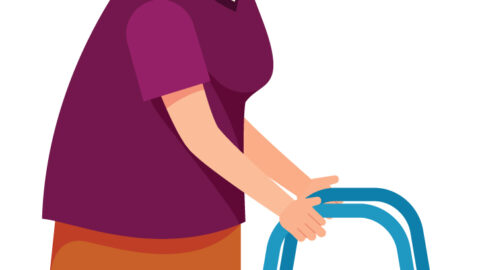