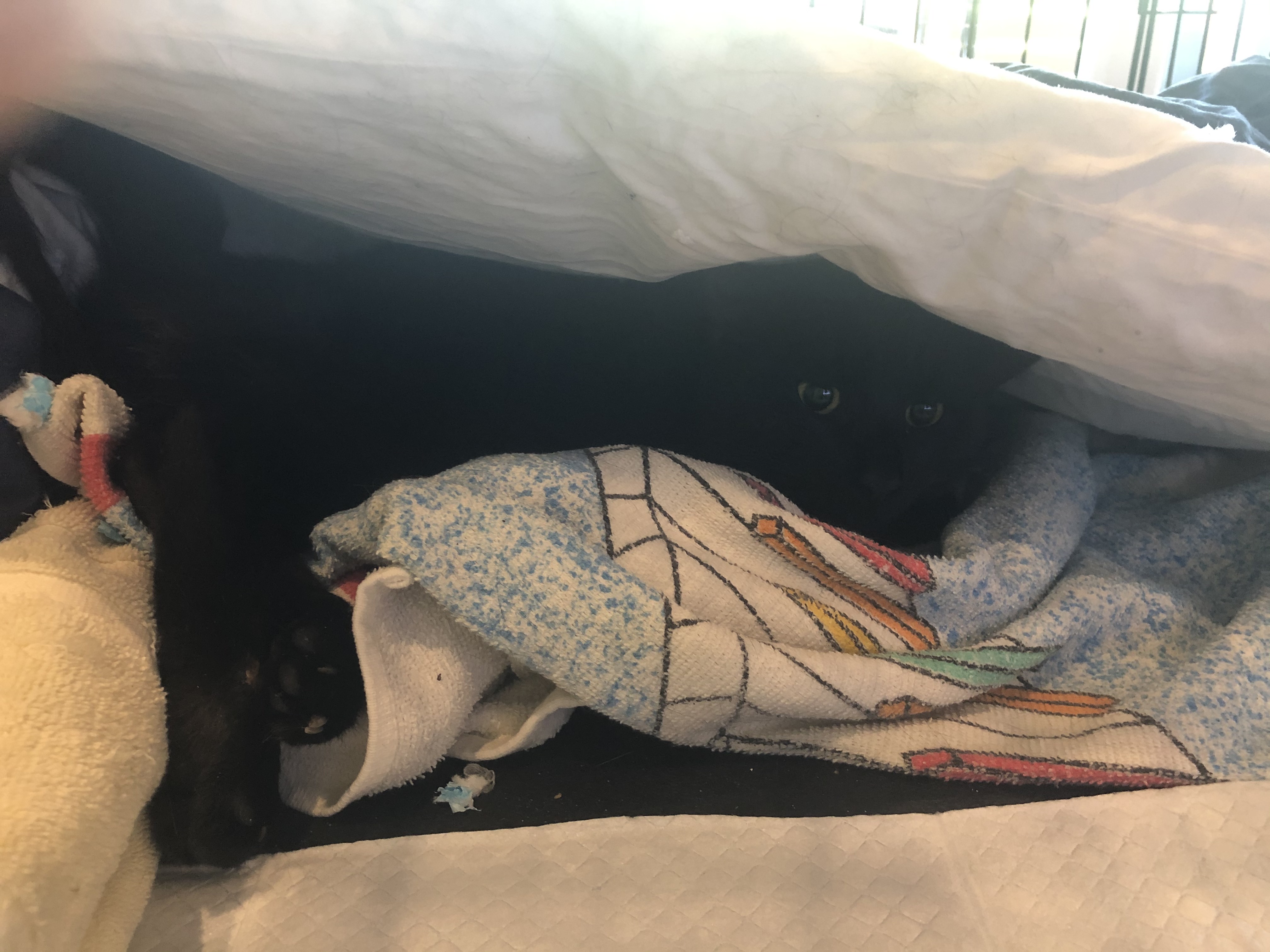 Do you remember my article on Scooter, the cat with the spinal cord injury that I was fostering after rescuing him from the streets with completely cut-up hind legs? For those who missed that article, Scooter was rescued as a stray cat who was dragging his hind legs and it was originally believed that he had been hit by a car. And while we really don’t know what caused the paralysis in Scooter’s hind legs, three vets agree that the paralysis resulted from a spinal cord injury of unknown origin.

Well, we’ve made a lot of progress and he and I are best friends. He is so affectionate, and he wants to be petted all of the time – but sadly, I barely have any time. Every time one of my two cats pass his cage, he gets up and rubs against his cage and meows, craving their attention. But they ignore him. So, my heart has been breaking because while his current situation is a vast improvement over his past circumstances, how incredibly boring it must be for him to be in a cage, despite it being a large cage, 24/7.

So, I reached out to Northshore with a heartfelt plea and they stepped up to the plate once again.

So, now let me tell you about Scooter’s next chapter. The first thing Northshore will be doing is putting him in a very large clear playpen so that he can use a litter box. I use training pads because putting a litter box in his cage leaves him too little room to move about. Next they’re going to have a device made for him to help him get around – although truth be told his upper body is so strong that he can move around quickly without a device, but he does drag his lower body, which is pretty sad. It also leaves the wounds on his back legs vulnerable to reopening.

After they get to know him better, along with his abilities and handicaps, they are going to work on finding him a forever home.

From my perspective, if Scooter never leaves NorthShore he will be one lucky boy. Bianca’s Furry Friends is the most amazing facility for cats and Scooter loves other cats so much so I know he’ll be over the moon with all of the attention he will get from the staff and the other cats he’ll be housed with. I have total faith in NorthShore and I know that I couldn’t be placing Scooter in better hands than their hands.

My heart is sad as I am writing this article because tomorrow morning is when I say goodbye to Scooter, but when you love an animal, sometimes you have to make a painful decision that’s best for them. I always knew that my role was that of a foster mother, but my cute little Scooter has carved out a special place in my heart and I’ll always remember him and follow his journey for as long as I’m able. As I have said more than once – thank you so much NorthShore! You and your staff are truly heaven sent!