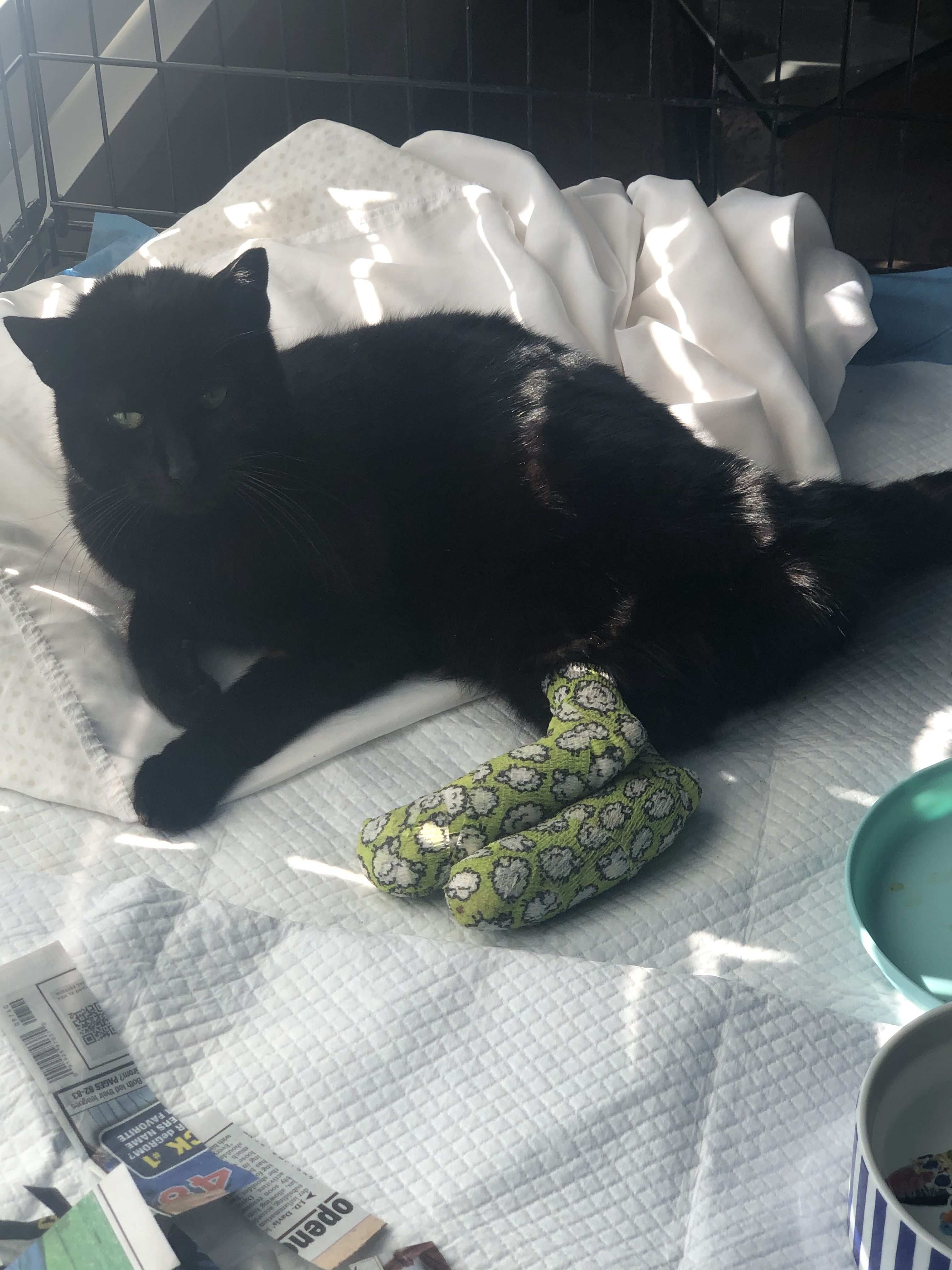 For the last two years I’ve distributed feral cat shelters at no cost for Neighborhood Cats of Staten Island. This year I distributed close to 500.

A little over a month ago a rescuer came to pick up two shelters and she told me about a cat that she believed had been hit by a car that was dragging its two back legs. Nobody had been able to trap the cat because it would shelter behind a padlocked gate of an abandoned junk yard in the St. George area of Staten Island.

I reached out to a rescuer who I work with to see if he would help. As much as I love cats and have a soft spot for strays and feral cats, I’m not the “real deal,” compared to the rescuers who know how to trap and/or handle feral cats.

Dean Klopsis of Staten Island Hope Rescue agreed to help. Dean is amazing and he went almost daily for more than a week and spent a lot of time with a drop trap and net in front of the abandoned yard.

One Saturday, Dean called to tell me he had been there for four hours and had to leave. I asked him to wait for me with the drop trap and I headed over. After waiting for three and a half hours on a particularly cold day, and seeing the cat with the top of its back legs completely cut up because he had been dragging them, I called the woman who got me involved in the matter. I told her we had spent a total of seven and a half hours there and asked her to come and help.

After she arrived, we discovered there was a way to get into the back of the lot with great effort. I pulled back the cyclone fence with the help of a passerby and she crawled in with a carrier. Reaching for the cat, she was bitten because she grabbed the cat’s back leg as it attempted to hide under a dumpster, but the hard work paid off. Out came the cat I’ve named Scooter, who has been living with me ever since, although I only consider myself his foster mother.

Scooter is being treated by North Shore, and if you look at the loop on his body it’s called an Assisi Loop. It seems that Scooter wasn’t hit by a car, but he does have a spinal cord injury that could have been caused by a tail pull. The Assisi Loop uses low-level pulses of electromagnetic energy to reduce pain and swelling, and to enhance recovery. The Loop is a targeted Pulsed Electromagnetic Field Therapy (tPEMF) that is portable and ready to use. 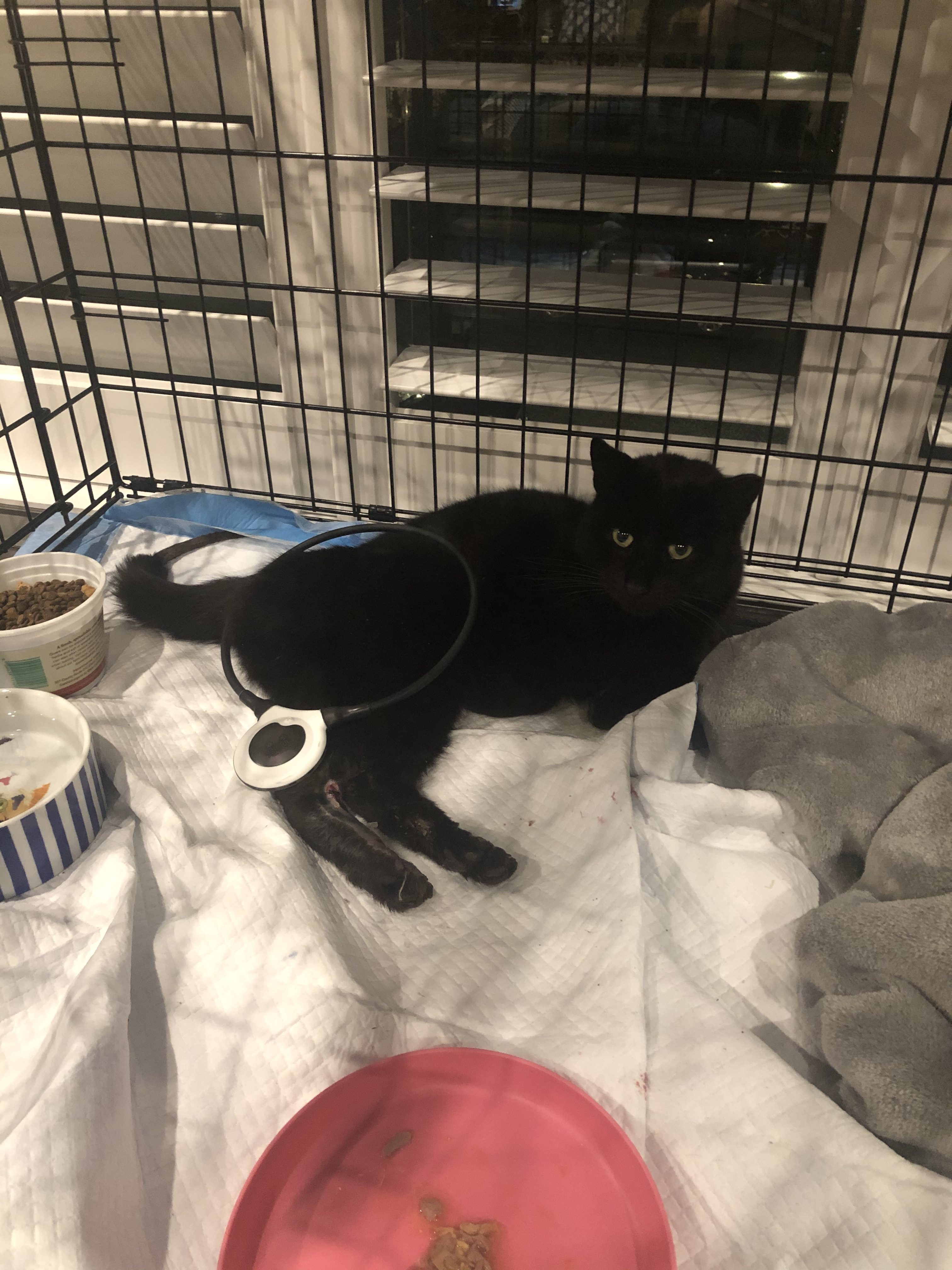 So, Scooter is on the mend and he won’t die a horrible death on the street, which inevitably would have happened as his cuts would have become infected. He’s such a sweet boy, and if not for Denise, who alerted me and who was bit doing her part, and for Dean who graciously agreed to help, and for North Shore, who is treating Scooter, Scooter’s future wouldn’t be as hopeful as it is today. I hope to be able to share a future picture of Scooter showing him walking, which is a possibility in a best-case scenario.

In closing, stay safe everyone and know that the BCAC is doing everything to keep you posted about grants and loans for your bases, as well as help for our drivers. On March 20, Ira Goldstein and I had a conference call scheduled with the new TLC Commissioner, Aloysee Heredia Jarmoszuk. I promise you, that in addition to helping Scooter, I’m doing everything possible to help each of you and each of our drivers. Also, for any base that is not a BCAC member, you’re missing out on our weekly newsletter that will keep you up to date on critical information. If you’re not a member, you should become one today by contacting me at diana@bigapplecar.com. Stay safe everyone and stay positive.