Three months ago, I published an article examining the efficacy of the congestion surcharge (see First Report Card on Congestion Surcharge). In this update, the analysis has been expanded to include two other regulatory changes undertaken by New York City and the Taxi and Limousine Commission (TLC), namely the moratorium on the issuance of For-Hire Vehicle (FHV) licenses (Local Law 147), and the driver pay standard (Local Law 150).

Together, this triad of policies holds the promise of altering the regulatory landscape of ride-hailing services in New York City. Have they been effective? Only time will tell whether any of these policies will work, but below are the initial results:

Congestion Surcharge:The year-end revenue would most likely hit or even exceed the target. Despite discounts on pooled rides, the number of shared trips has been trending downwards since February 2019.

For-Hire Vehicle License Cap:There was an increase in the number of FHV licenses during the initial one-year cap period due – in large part – to the influx of last-minute FHV license applications filed before the enactment of the FHV cap in August 2018. Overall, the number FHV trips outside the Manhattan Core have grown while wait times have remained relatively stable.

Driver Pay Standard:The number of trips where app company drivers have been underpaid has declined significantly after the enactment of the driver pay rule. Uber and Lyft have increased fares and stopped accepting new drivers, and this seems to have curtailed ridership and could even have contributed to the reduction in the number of vehicle crashes.

The congestion surcharge has been in effect since February 2, 2019. Based on tax return information obtained from the NYS Tax Department as summarized in the chart below, the total surcharge revenue collected between February and May 2019 was $141 million. This amount would bring the projected annual revenue to roughly $397 million. Approximately 86% of all taxi trips, 40% of all FHV trips, and 50% of all pool trips were subject to the surcharge over this same period. Since these numbers are indicative of the distribution of ride services across all five boroughs, we can conclude that a vast majority of FHVs (60%) operate outside the Manhattan Core (below 96th Street) in comparison to taxis (86%).

Another significant finding: Although the congestion surcharge offers a significant discount on pooled rides, the number of shared trips actually dipped by 7% between February and May 2019 (see diagram below). This demonstrates that the discount has not been effective in encouraging more ridesharing; at least for now. 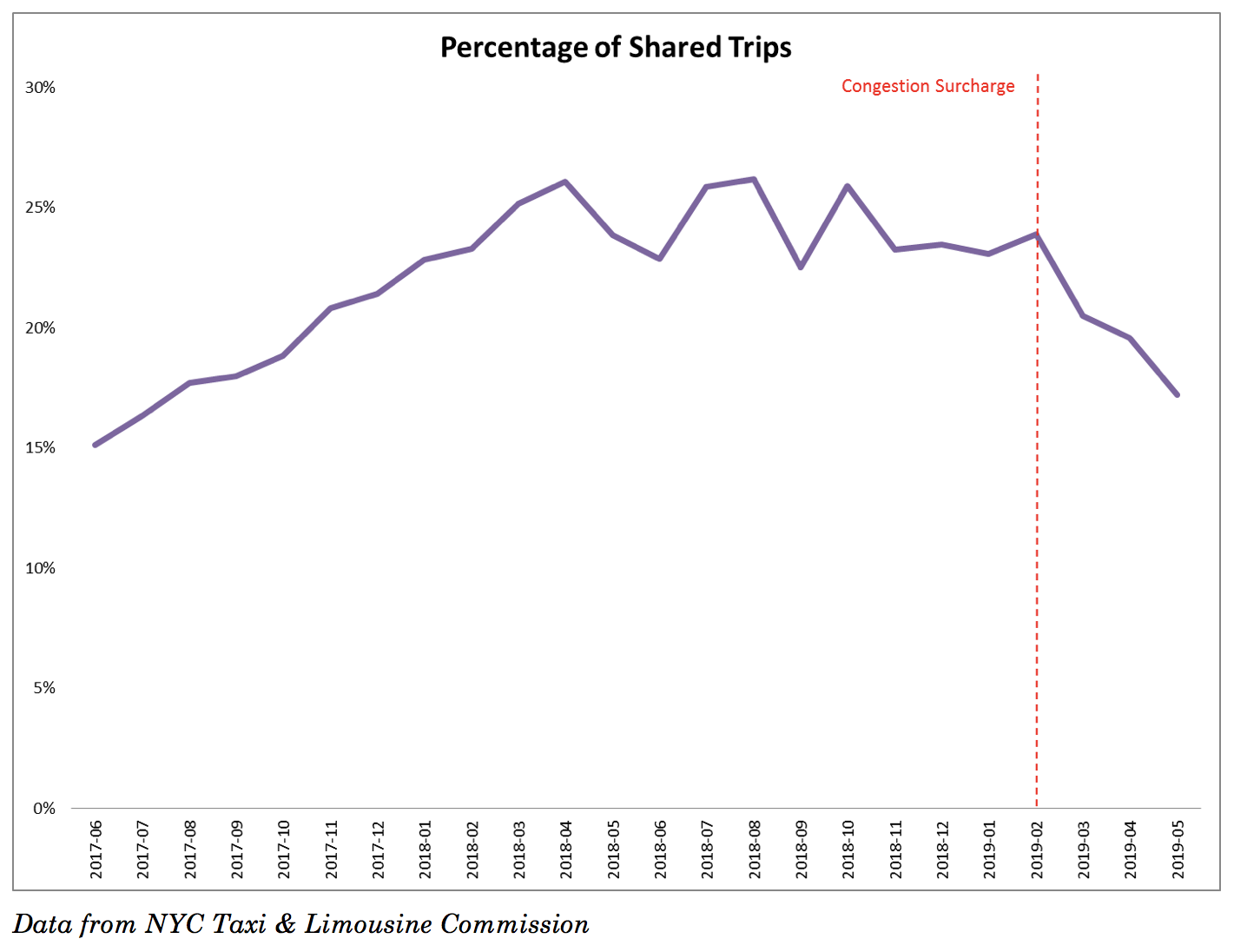 The FHV license cap was passed in August 2018 under Local Law 147, prohibiting the TLC from issuing new licenses with the exception of wheelchair-accessible vehicles (WAVs) for one year. The law directed the TLC and the City Department of Transportation (DOT) to study the impact of FHVs on traffic congestion, and authorized the TLC to regulate the number of FHVs and set cruising standards (driving time without a passenger).

What has been the outcome of this year-long moratorium? On June 12, 2019, the TLC and DOT released the FHV congestion report, which found no decline in the number of licensed FHVs during the FHV license freeze. In fact, the number of new FHV licenses actually increased compared to the same time period in prior years, due in large part to the rush of applications. According to the report, the TLC issued approximately 15,000 new FHV licenses between August 2018 and May 2019 – “over 96% of which were issued from open applications initiated before the pause took effect and not as a result of the limited exemptions permitted during the pause.” Nonetheless, the overall number of FHV trips has risen by 16% over the same period. Specifically, FHV trips outside the Core have grown compared to the same period last year across all boroughs and nearly all neighborhoods have average wait times below 8 minutes (see diagram below). 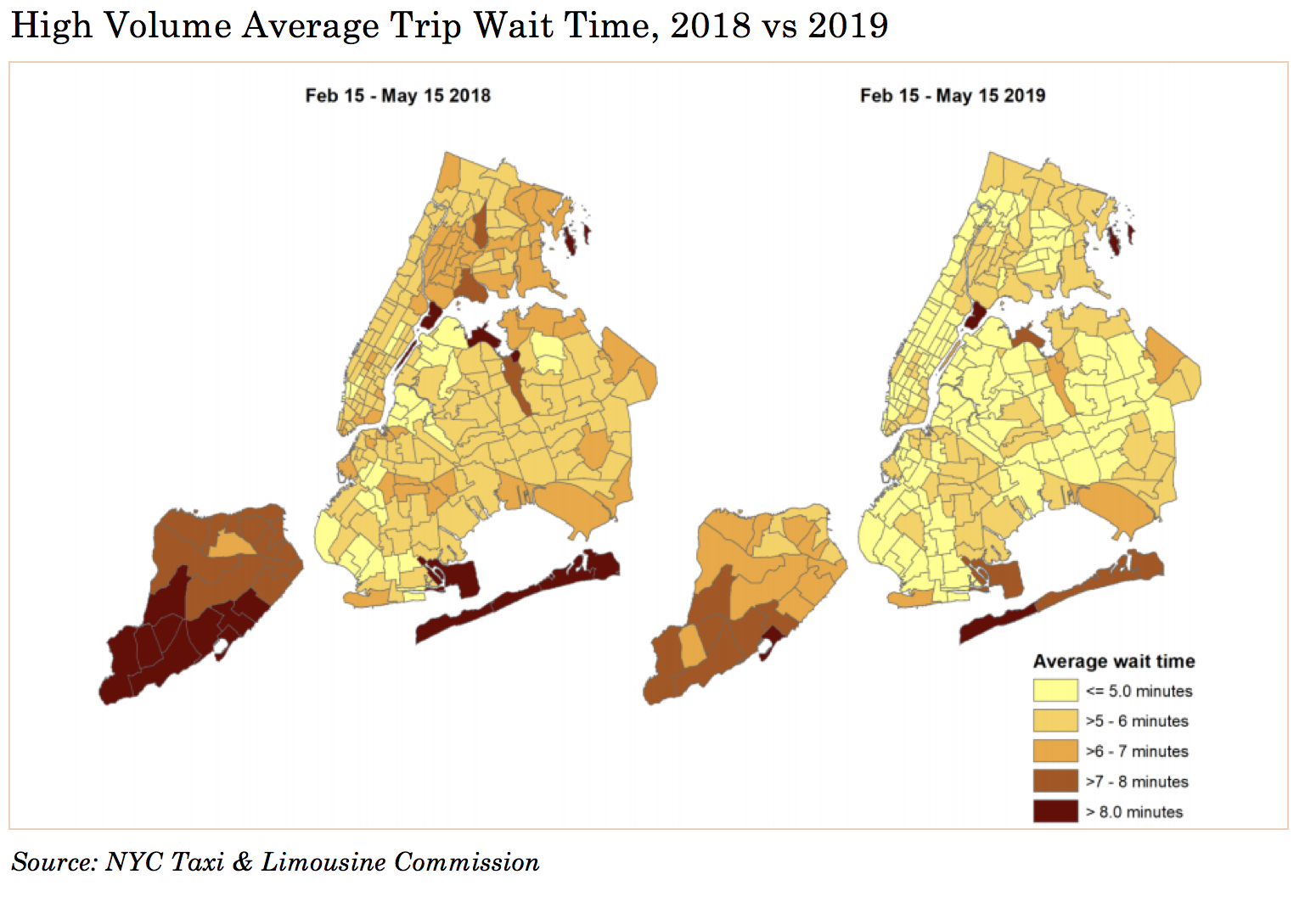 Following the study’s recommendations, the TLC proposed rules that would require High-Volume companies to limit their company-wide cruising rate below a certain percent in Manhattan south of 96th Street during peak hours, weekdays from 6:00am to 11:00pm and weekends from 8:00am to 11:00pm. Under the proposed rules, High-Volume companies have one year to reduce their company-wide cruising rate below 31%. Starting February 1, 2020, the cruising rate cannot exceed 36%; by August 1, 2020, the rate must be below 31%. Violators will be subject to fines. At a July 23, 2019 TLC public hearing on the proposed cap extension and cruising limits, Uber and Lyft voiced their dissatisfaction with the new rules, arguing that there might be unintended consequences. Regardless, on August 8, 2019, the TLC voted unanimously to extend the cap – and pass new rules to limit cruise rates.

The driver pay standard was also introduced in August 2018 (as Local Law 150), mandating the TLC to establish a minimum payment formula to determine the amount that High-Volume For-Hire Vehicle (HVFHV) services must pay their drivers. The TLC driver pay rules went into effect February 1, 2019. The rules do not set the passenger fare or establish a minimum wage. Instead, the rules dictate the minimum amount that HVFHV companies must pay drivers based on a per-trip payment formula. The formula is designed to provide drivers a minimum take-home pay of $17.22 per hour after expenses.

The driver pay formula has three components: time, distance and utilization rate. The utilization component accounts for the amount of time drivers spend transporting passengers compared to their time spent idle and waiting for a fare. The utilization rate is meant to incentivize HVFHV companies to use their driver pool more efficiently and is calculated and adjusted periodically. The higher a company’s utilization rate, the less it has to pay drivers to meet the wage floor, and vice versa. The formula essentially penalizes companies for having too many vehicles cruising city streets waiting for a dispatch.

As of February 2019, the industrywide utilization rate was 58%. Via, whose business model is based on pooled rides and efficient use of vehicles, had a slightly higher utilization rate (69%) than Uber, Lyft, and Juno (53–58%). In addition, the TLC has been auditing trip records to ensure drivers are being paid what is due under the driver payment rules. HVFHV companies must submit data on driver pay, passenger fares, driver working time, and trip distance so that TLC can determine whether the drivers were paid at least the minimum amount under the rules. Every discrepancy or instance of underpayment – even by a penny – must be remedied.

So, what are some of the tangible outcomes of this new wage rule? According to the TLC, since the rule took effect, more than 71 million trips have been subjected to the new standard and drivers have been paid an additional $225 million. The diagram below shows the drastic decline in underpaid trips per day between early and mid-February 2019. 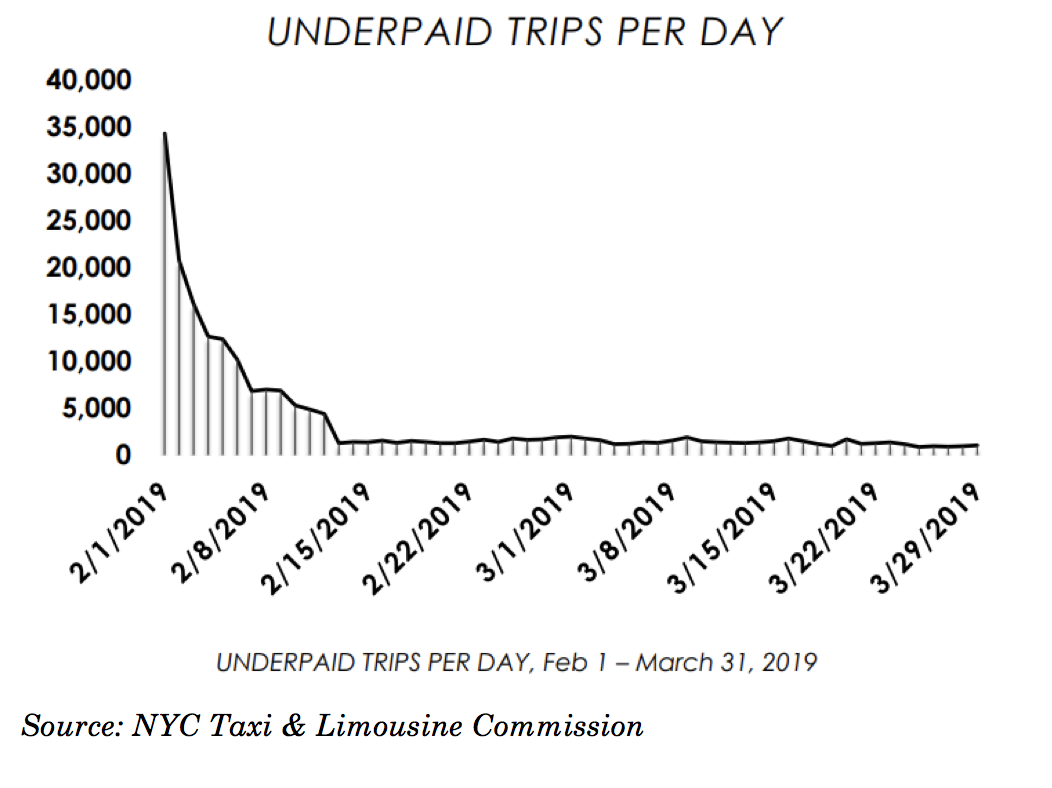 In order to comply with the driver wage rule, Uber and Lyft have increased fares.  In addition, Uber added a surcharge to trips ending outside the City limits to make up for the fact that HVFHV companies are required to compensate drivers for time spent driving back to the City for such trips. As mentioned earlier, the congestion surcharge went into effect at the same time as the driver wage rules. According to Uber, “[f]or the average New York City UberX ride (a $22 fare), riders can expect that over 20% of what they pay will go toward government-mandated taxes and fees,” including the congestion surcharge.

It is possible that rising fares have curtailed rider demand for Uber and Lyft service. As seen in the chart below, trip volume for both companies declined in May 2019. TLC trip data shows an 8% drop in the number of Uber trips since March, while Lyft was down 0.36% during the same time period. 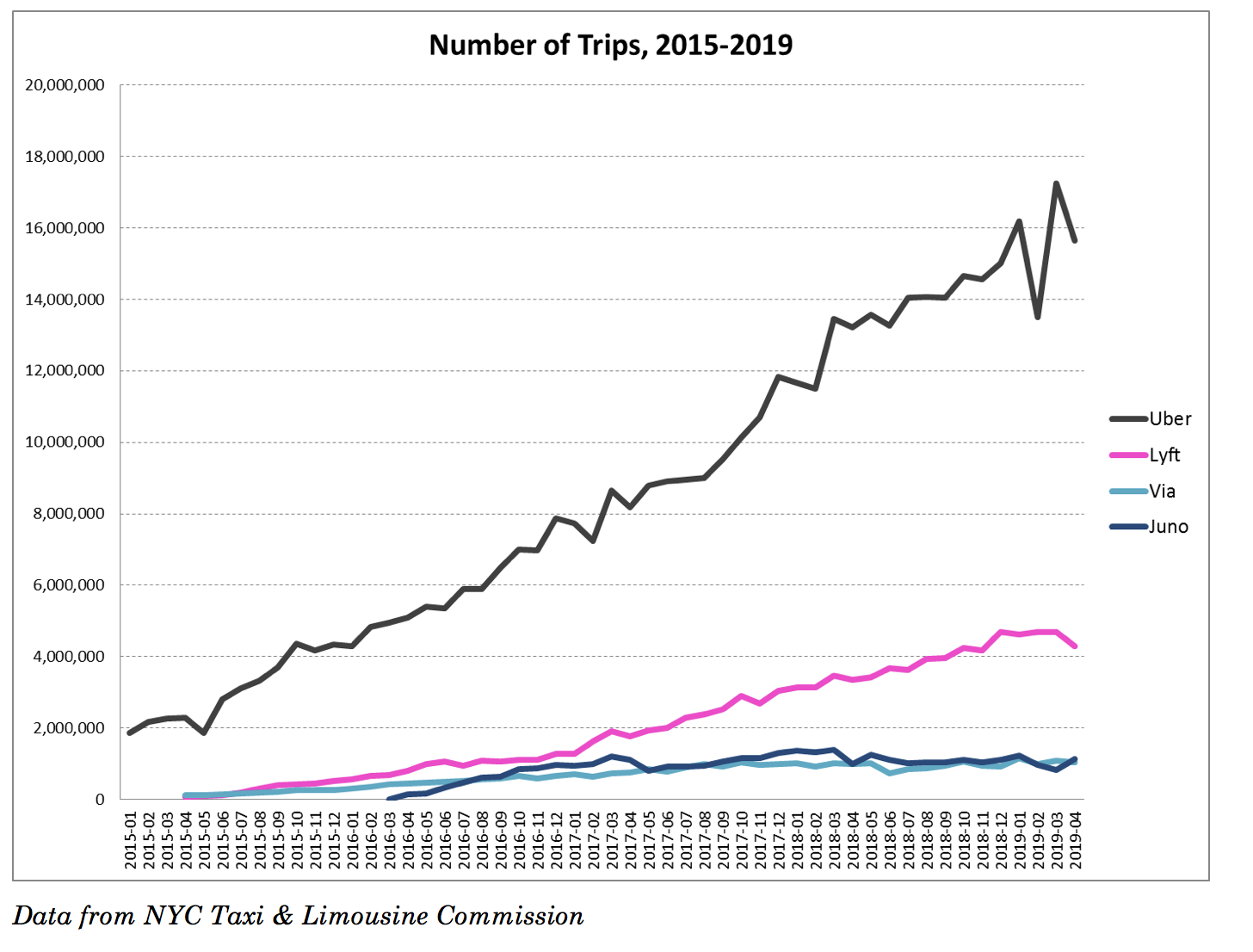 Not only has the number of trips declined, the number of crashes involving black cars (which categorically include Uber and Lyft) seems to have gone down as well (see diagram below). It is too early to tell, absent a more detailed analysis of vehicle crash data, as to whether there is a clear correlation or causation and effect resulting from any of the new policies and laws. 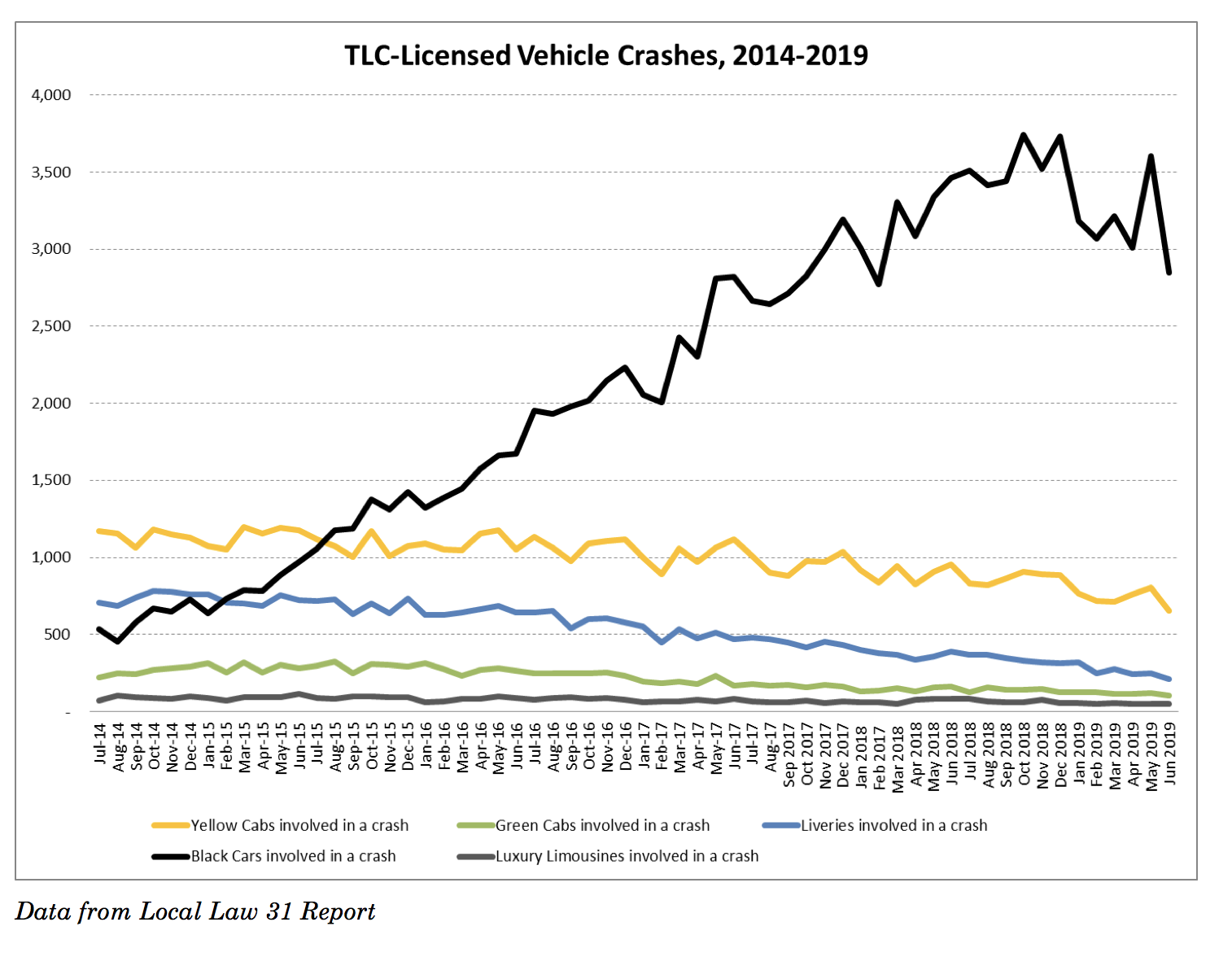 Uber and Lyft have both taken steps to increase their utilization rates by decreasing or limiting the number of drivers on their platforms. In April 2019, both Uber and Lyft stopped accepting new drivers in New York City. On its website, Uber states the policy, which went into effect April 1, 2019, is “due in part to new TLC regulations.” According to media reports, Lyft stopped accepting new drivers on April 19, 2019. As a result, the number of app-based drivers has plateaued for the first time in the history of the industry (see diagram below). 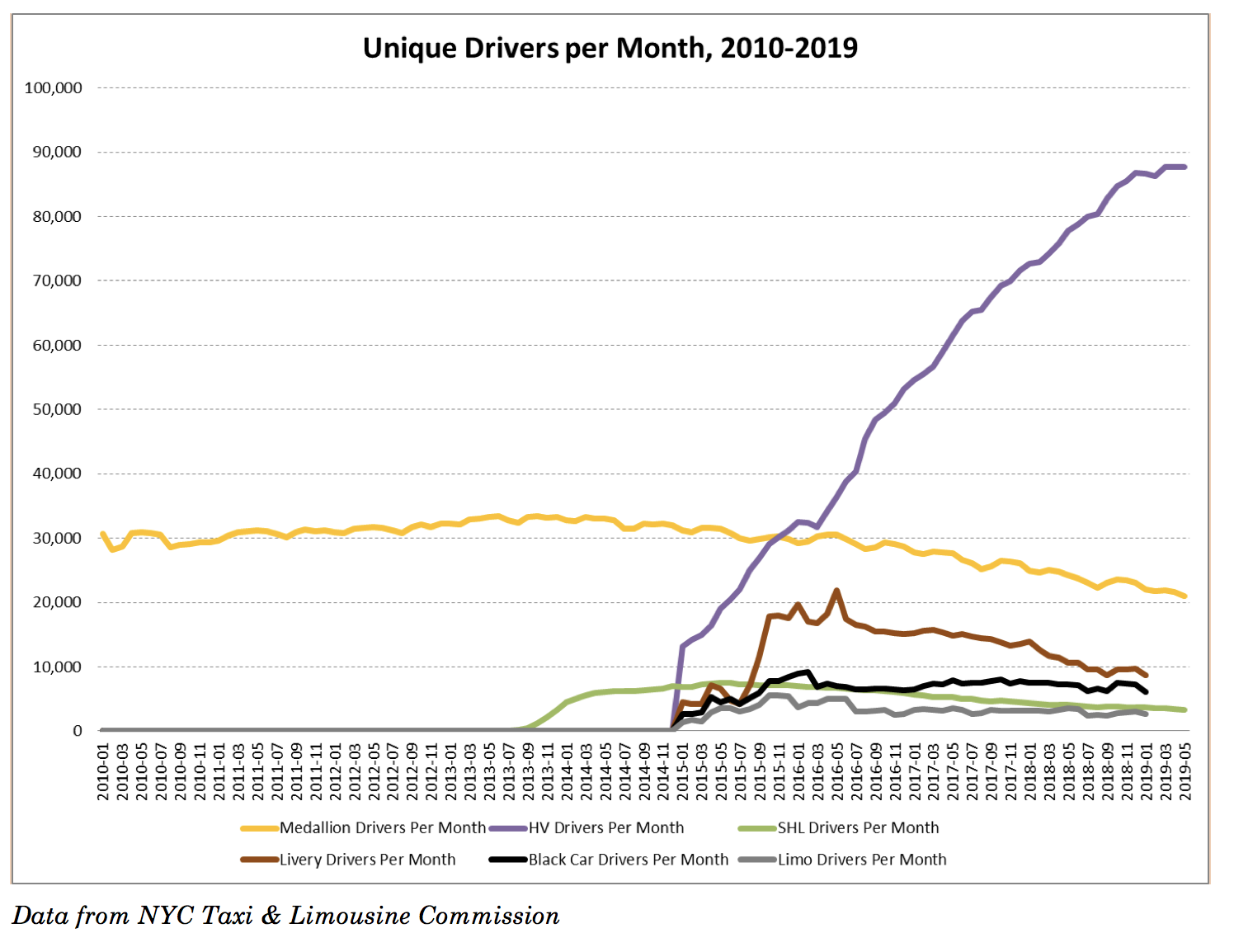 It was also reported that, beginning June 27, 2019, Lyft no longer allows drivers to sign onto the company’s app if they are cruising in an area where demand is too low. Uber is planning to do the same. In addition, Uber is seeking to invest in a 200-spot parking lot just north of 96th street in Manhattan to be used as a base of operation for its affiliated vehicles. These measures have created dissent among drivers, and may increase operational costs for the app companies.

The report card below takes into consideration the stated or purported policy objectives that the State, City and TLC seek to achieve by the passage and implementation of the many new laws and regulations involving the taxi and FHV industries. 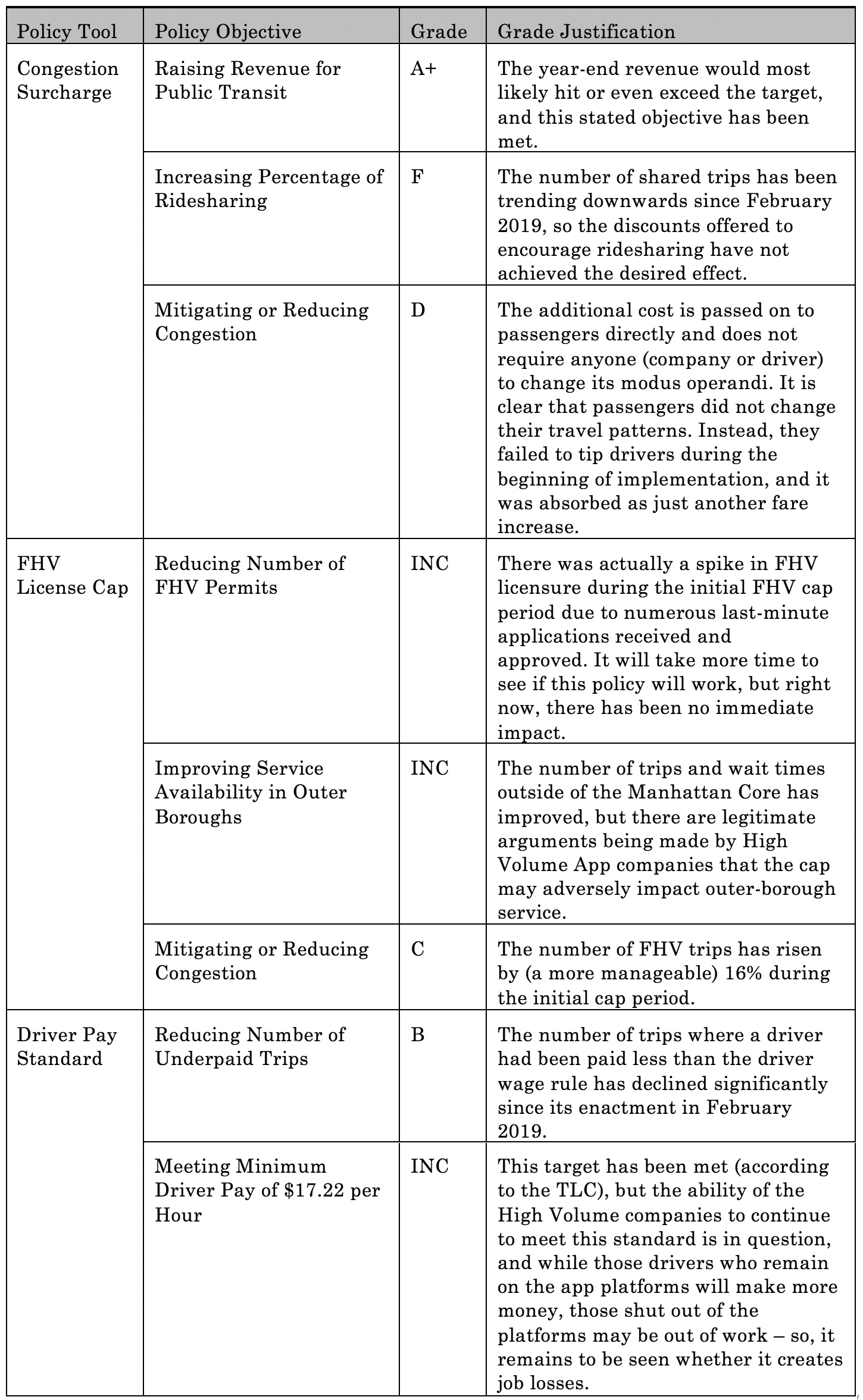