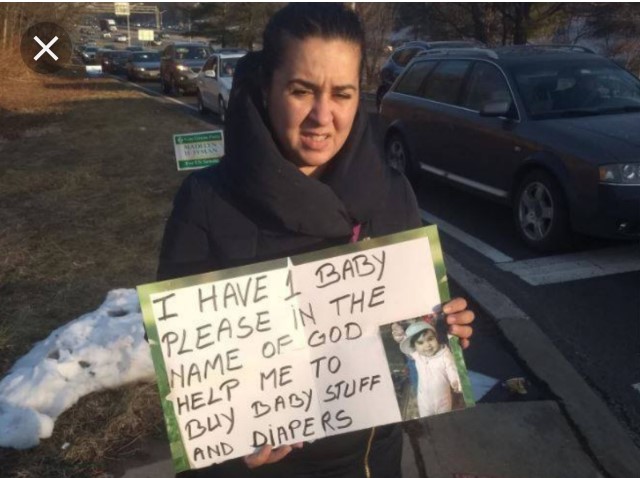 Encountering panhandlers is a regular experience for most people in the tri-state area around New York City. FHV chauffeurs are especially vulnerable targets because we are (or at least we should be) dressed nicely, with a suit and tie. Also, we usually drive a nice car. Panhandlers therefore naturally think we have lots of money.

One of my (many) faults is that I am “Mr. Gullible”… trusting and quick to believe people that I meet.

In the early 1980s, I went to NYU for four years, and lived in and around Manhattan for 10 years after college, in the Yorkville neighborhood. I would walk from 88th Street and York Avenue to the “Number 6 local” 86th Street subway on Lexington Avenue. I saw panhandlers every single day on my walk to the subway.

While I was attending NYU, I regularly saw a panhandler on the corner of 8th Street and University Place. It irked me to see him out there day after, so one day I said something to him that I have since regretted: “Get a job.”

I had no right to say that to him, but there it is. We all do things we regret, I suppose.

His reply surprised me: “This IS a job.”

I’m a little ashamed to admit that I fell for one of the oldest scams in the book. I was walking my friend’s Bulldog, Elwood, down Columbus Avenue. At 86th Street, a young man asked me for $20 to buy a bus ticket to Poughkeepsie, to visit his sick mother. I went to an ATM – with Elwood in tow – took out $20 and handed it to him. I can’t believe I did that; he could have killed me! I think Elwood saved my life.

I’m such a sucker for a lady. One day, a “damsel in distress” asked me for money while I was filling my gas tank. She said she needed it for her and her baby. I felt so badly for her. She said, “I need money, but don’t ask me to do anything for it.”

Befuddled, I said I would help her but I wasn’t going to give her money. Instead, I brought her to a nearby convenience store and said, “Buy what you want to eat and I’ll pay for it.”

Twenty dollars later, she happily walked out of the store with two bags of food and diapers. A week later, I saw her and bought her three things. She was very grateful.

Every morning, I fill my gas tank and get a cup of coffee at the same gas station and convenience store. For a few months during the Spring and Summer, there was a man who would open the door to the food store for customers, just like a doorman on Park Avenue in Manhattan. Thinking “that could be me,” I would hand him a dollar bill every time I would go in for a cup of coffee.

Early one morning, I handed him a dollar bill and he said, “I need another dollar.” I asked him why and he said, “to buy cigarettes.” I told him to stop smoking. I also stopped giving him money. Boy, I felt like a chump.

I’m still not sure if I should have believed this one. Early one morning, I was at a gas station filling my tank and a guy pulled up to me in a really nice pickup truck. He said, “I lost my wallet and I need $1.50 to pay the Parkway toll to get home.” I said, “That’s a new one.” He scowled at me and said he was telling the truth. I handed him two bills. He snatched them, then jumped back into his pickup without saying a word. I said “you’re welcome” to him as he sped away in the dark.

Now, I offer panhandlers a bottle of water and a Nature Valley granola bar. Most are grateful for this small offering.

The moral of this street story is, don’t believe everything you see or hear – but if you can help someone in need, do your part to make their day.

Be Prepared: The Holidays and Winter Weather Are Coming