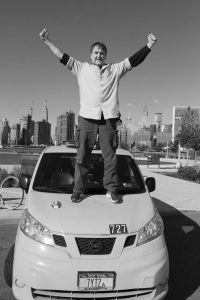 Drive a New York City taxi for 40 years and, man, you’ll see some crazy stuff. John McDonagh, 63, of Middle Village, Queens, has collected some of the livelier moments from his career for his one-man Off Broadway show, “Off the Meter, On the Record,” which opened in October for previews at the Irish Repertory Theater in Chelsea.

“When I first started driving, there was a complete fear in me,” said McDonagh, noting that back in 1977, there were no cellphones to get a driver out of a tough spot. “I was robbed, I had a gun put to my head and a knife held at my throat.”

After a 12-hour night shift in a checkered cab without air conditioning, he said, “you’d get back to the garage and you’d be rubbing the pollution off your face and arms.”

Over the years he’s shuttled drug users to dealers, women in labor to hospitals and countless drunken, sick and angry passengers to their homes.

While this is Mr. McDonagh’s first Off Broadway show, he’s no stranger to the limelight: He has a radio show on WBAI, and he has dabbled in live storytelling, political activism and reality television.

“I was going to be the Kim Kardashian of driving cabs,” he said, after almost making it on “The Amazing Race” and nearly appearing on “Taxicab Wars.”

He still drives a cab, even though the job has lost some of its charm, he said.

“The conversation between drivers and passengers has virtually ended since the invention of the iPhone,” he said. “Now, people couldn’t care less about you.”

Why is Facebook Under Fire for Shady Data, But Not Uber?

Will NYC Become the First Major U.S. City to Cap TNCs Like Uber?

NYC to Impose Caps on Lyft and Uber