New York transportation authorities in November began placing hundreds of large concrete barriers at 57 intersections along the Hudson River Park Bikeway in an effort to protect the popular path from future terror attacks. The move came after an attack, in which Sayfullo Saipov is accused of driving a rental truck for a mile down the narrow bikeway, killing eight people and injuring 12 others.

Ben Sarle, a spokesman for Mayor Bill de Blasio, said that the concrete barriers would be placed at both vehicle and pedestrian intersections of the bike path between 59th Street and Battery Park, along the West Side Highway. At each of the 31 vehicle access intersections, the State Department of Transportation will put in six concrete jersey barriers. At each of the 26 pedestrian access intersections, the City Department of Transportation will place two large concrete cubes.

Jennifer K. Post, a spokeswoman for the state Transportation Department, said the agency will continue to evaluate if additional or different measures need to be taken. Images posted on social media showed the angle of the bulky barriers and the shrinking space that bicyclists and pedestrians now have to pass at some points on the path. Some people have expressed concerns that the barriers could impede the flow of bicycles and pedestrians on the busiest bike path in the city.

“After these safety measures are installed, there may be areas at the intersections that will be more narrow than they used to be,” said Mr. Sarle, adding that the placement of the barriers may be changed if they are found to cause congestion. “But, I would trade a little speed for substantially more safety any day.”

Vehicles will still be able to cross the bike path to access athletic fields, offices and parking lots on piers along the Hudson River, he said, but they will no longer be able to drive on the path. The new safety measures are being taken in consultation with the Police Department and other city and state agencies, Mr. Sarle said. 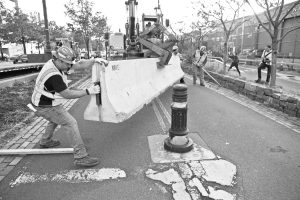 Multiple WAV Service Improvement Programs are in the Works, But Only One is Sure to Cause Tremendous Trouble in the Industry

If You Thought things were headed in the right direction, Take Another Look at UBER & LYFT

Prevent Winter Weather From Causing Permanent Damage to Your Car

These Four Resolutions Will Help Make 2018 a Better Year