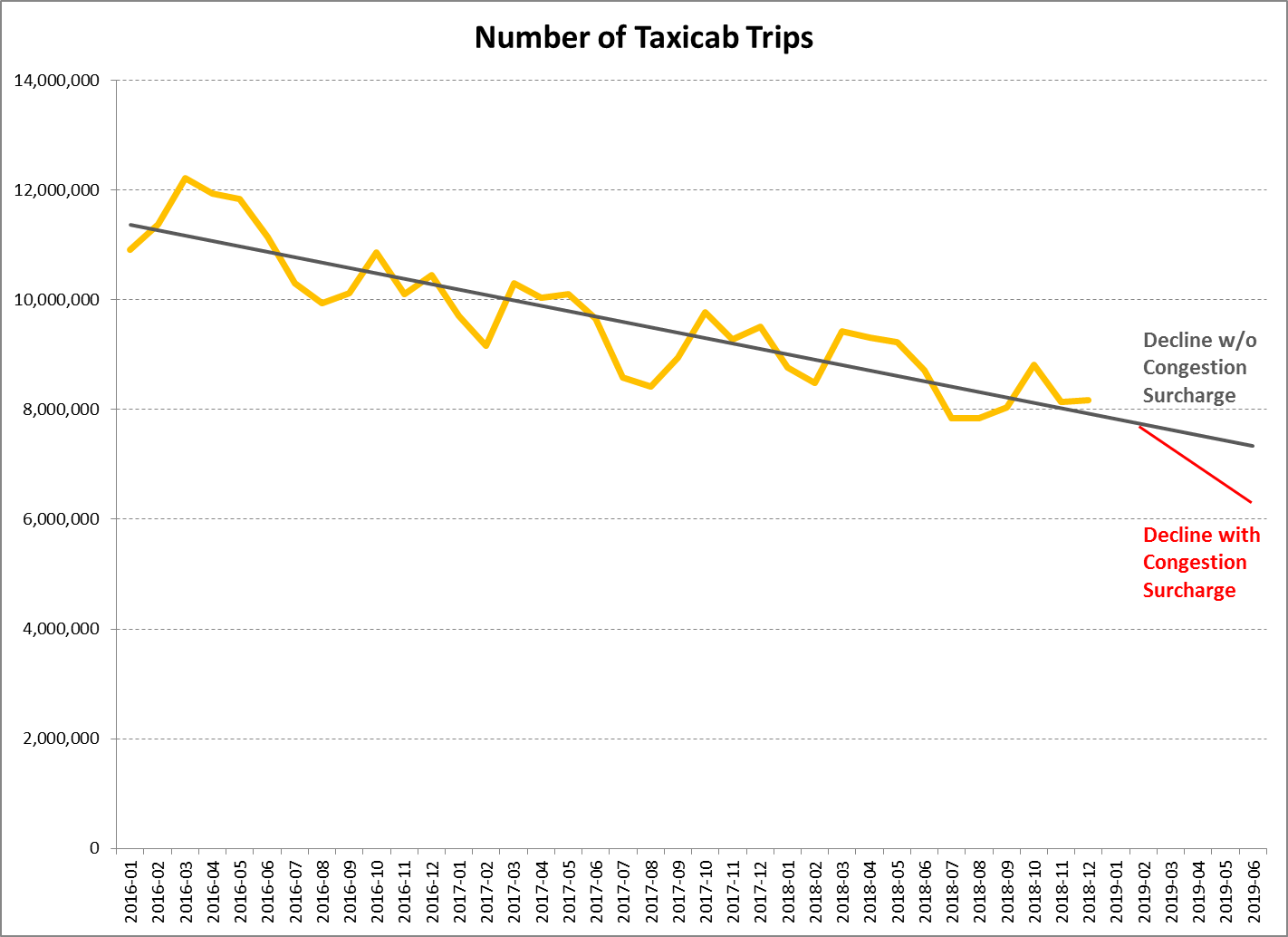 Phase 1 called for increasing mobility by investing in public transportation improvements, heightened traffic enforcement in the CBD, addressing bus congestion, and overhauling the parking placard program. Next, in phase 2, the state would review revenue options to fund transit improvements and implement congestion surcharges on FHV and taxi trips below 96th street. Finally, in phase 3, there would be a congestion pricing zone established in the CBD. This bifurcated system will continue only for vehicles licensed by the NYC Taxi and Limousine Commission, until possibly January 1, 2021, when the congestion pricing scheme will apply to all other non-exempt vehicles. This article provides the basics of what happened, what is expected to happen, and when.

Most of the details, including the amount of the congestion toll, are yet-to-be-decided and will be left up to the Metropolitan Transportation Authority (MTA) and a yet-to-be-appointed “traffic mobility review” board, but this is what we know so far:

The rest of the details of the final tolling system – including the amount of the toll – will be determined at a later date by the MTA’s Triborough Bridge and Tunnel Authority (TBTA), based on non-binding recommendations from a six-member “traffic mobility review” board. The mobility board’s recommendations are due between November 15, 2020, and December 31, 2020.

The board will be appointed by the MTA, with the New York City Mayor recommending one member. One member must live in the Metro North region and another must live in the Long Island Rail Road region. Long Island Rail Road and Metro North will each get 10% of toll revenue, and NYC Transit, which includes subways and buses, will get the 80% of the toll revenue raised from the congestion pricing plan.

The law gives the traffic mobility review board wide discretion to recommend variable toll amounts based on factors like traffic speed, congestion levels, traffic demand, or other measurable parameters. The law also allows the TBTA to take vehicle type, operating costs, public impact, public safety, and hardship into account in setting the fees.

There are only two exemptions written into the legislation itself: emergency vehicles and vehicles transporting a person with a disability. The law leaves it to the MTA to decide the eligibility criteria for the disability exemption. While not exempt, CBD residents who earn less than $60,000 annually will be eligible for a tax credit on their tolls.

The traffic mobility review board could recommend other credits, discounts, and exemptions, and everyone from the freight hauling industry to motor cycle groups and off-duty cops are arguing the congestion charges should not apply to them. MTA Chairman Pat Foye said people who cross the 60th Street boundary while moving their cars to comply with alternate side of the street parking rules will not be charged. The New Jersey governor and NY state legislators in Long Island are asking for an exemption for their constituents as well. The impact on neighboring states, such as New Jersey residents, has even prompted calls for retaliation from Jersey City’s Mayor in the form of tolls on New Yorkers to enter New Jersey.

Every carve-out and exemption may make the price of commuting more expensive for everyone else. Too many exemptions and discounts would also undercut the goal of reducing congestion.  I was quoted in a recent Bloombergarticle discussing exemptions for people with disabilities:

“The congestion pricing plan should include carve outs for people with disabilities, but where you draw the line can be a daunting challenge,” Daus said. Setting the criteria too broadly and subjectively “could result in a sizeable exemption group, which could undercut the revenue benefits.”

The Role of “Tolls”

How to factor in tolls that motorists are already paying to cross bridges and tunnels into Manhattan is another big question that has yet to be answered. The MTA and traffic mobility review board are required to come up with a plan to address the issue, and it is possible that drivers will get hit twice with tolls because they are intended to fund separate projects. The congestion toll is going into an MTA “lockbox” to fund subway and commuter rails, while the existing crossing tolls were implemented to fund other projects. Reducing one toll to pay for another might not make sense fiscally for the MTA, which is under a mandate to use the congestion tolls to come up with $15 billion in transit funding by 2024; a zero sum game that appears to be primarily revenue driven.

In February 2015, “Gridlock Sam” Schwartz and the Move NY coalition released a plan to revamp NYC’s existing and arguably dysfunctional toll system to reduce traffic congestion and fund transit improvements. Under the Move NY plan, tolls on drivers going into and out of Manhattan anywhere south of 60th Street, including the untolled East River bridges, would be approximately double the amount charged on major outlying bridges. Tolls on outlying bridges would be reduced up to half, essentially swapping the existing tolls and making it more expensive to drive where congestion is the worst. The plan would have set a consistent toll for all bridges and tunnels into and out of the CBD, thereby eliminating the practice of some drivers to go out of their way to use cheapest crossing. The Move NY plan also called for a surcharge on FHV trips below 96th Street based on time and distance traveled. Unfortunately, many of the “toll equity” components of the Move NY plan were lost in the congestion pricing shuffle.

The Importance of Other Transit Improvements

Many areas of the outer boroughs lack viable public transportation options into Manhattan, which is why people rely on personal vehicles in the first place. Transit improvements and discounted rail fares are crucial to the congestion pricing deal. Shortly after the law passed, Governor Cuomo and the MTA agreed to provide 20% commuter rail discounts to New York City residents not served by subways in northeast Queens. The MTA also agreed to put $3 million toward enhancing express bus service from Queens to Midtown. According to Governor Cuomo’s spokesperson, these projects will be funded, in part, by revenue from the for-hire vehicle and taxi congestion surcharge.

New York City buses are the slowest in the nation, averaging just eight miles per hour and often much slower during peak times on certain routes. In April 2019, New York City Mayor Bill de Blasio announced plans to help the city meet its commitment to increase bus speeds 25% by 2020. As part of the city’s 2019 OneNYC strategic plan, the City identified locations to implement its “Better Buses Action Plan” to increase bus speeds and ridership, which has decreased by 13% between 2014 and 2018. Even so, today NYC has two and a half times more bus riders than any other U.S. city. The City’s plan includes offset and barrier-protected bus lanes, enhanced bus stop design and spacing, updated curb management to prioritize transit priority, pedestrian space, and loading needs.

How would the congestion surcharge affect the yellow cab industry? While the TLC has not yet published taxi/FHV trip record data since the congestion charge went into effect, I have developed some projections. The ridership trend in 2018 for yellow cabs shows an average rate of decline of 1.1% per month. Since the average fare is $13.61, the congestion surcharge of $2.50 is the equivalent of an 18.4% fare hike. Assuming a price elasticity of -0.2, an 18.4% fare hike will diminish demand by an additional 3.7%. As such, the rate of decline might exacerbate from 1.1% (grey line) to 4.8%[1](red line).