Despite the fact that Black Cars already pay nearly 9% in sales tax, the Metropolitan Transportation Authority (MTA) wants ALL for-hire vehicle companies, including Black Cars, to pay the same 50¢ surcharge that yellow and green taxis do – even though no other segment of the industry regulated by the NYC Taxicab & Limousine Commission (TLC) pays the sales tax.

The 50¢ surcharge paid by green and yellow taxi trips will generate an estimated $87 million for the MTA this year, according to the Citizens Budget Commission (CBC). The Black Car industry is projected to contribute an estimated $7 million for the MTA in 2017, which is taken out of the revenue generated by the 9% sales tax. The CBC is concerned the MTA will lose revenue as Uber trips grow and taxi trips continue to decline, but instead of finding a reasonable solution, the MTA wants to squeeze even more money out of the entire Black Car industry.

The city has the power to set taxi rates, but a surcharge would require action out of Albany. The 50¢ fee paid by yellow and green taxis was created in 2009. 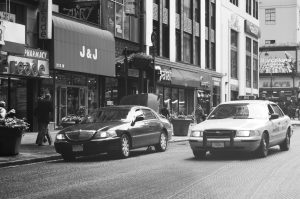 TLC Should Abandon Faulty WAV Plan, Postpone Sept. Hearing and Work With a United Industry on a Real Solution

Legislation Introduced to Crack Down on Illegal “FHV” Activities

IS THE END ON THE HORIZON… OR WHAT?