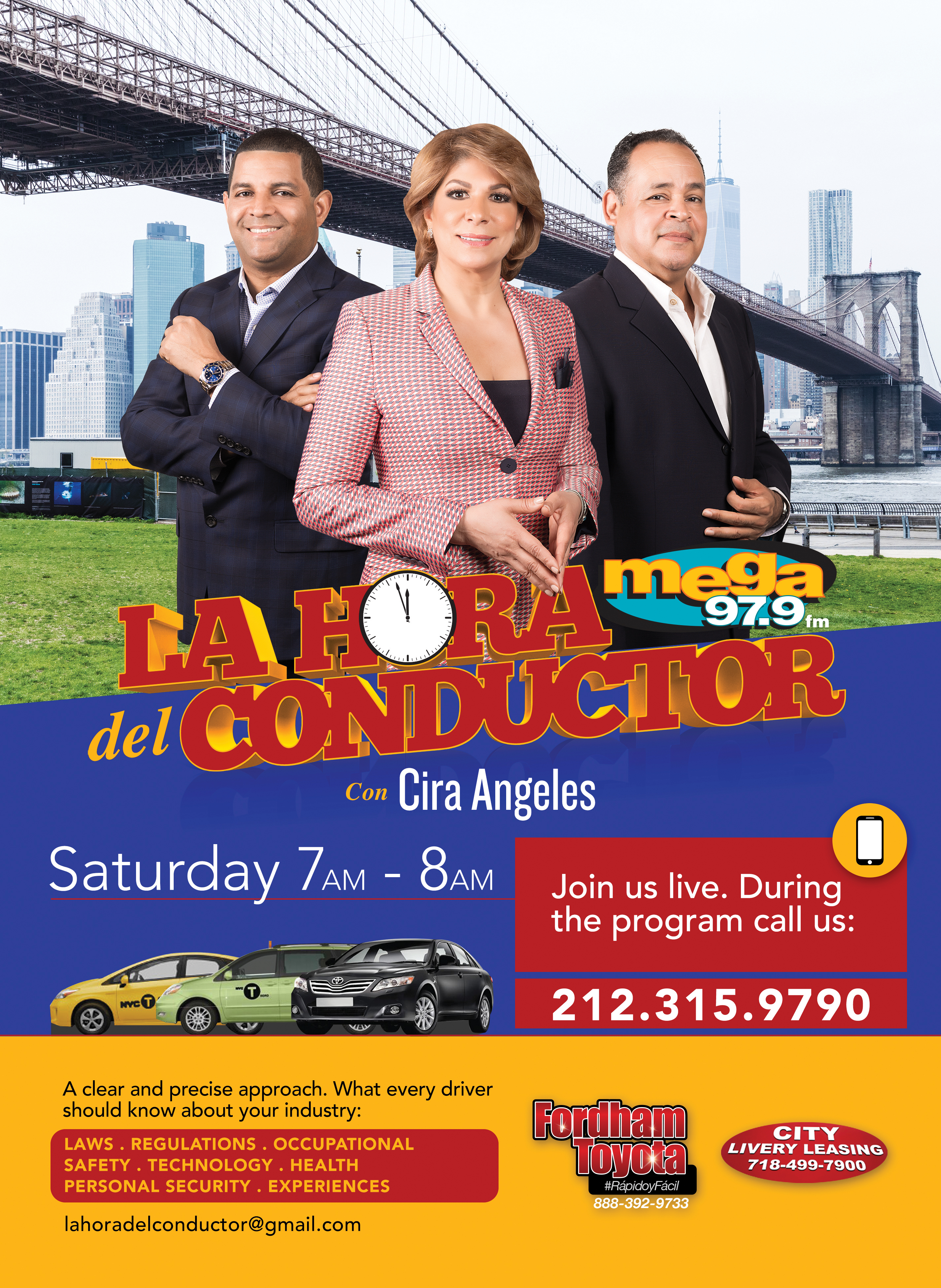 For the past eight years, Cira Angeles, a highly-respected spokeswoman for the Livery industry, has hosted a weekly radio show, “La Hora del Conductor,” featuring news, tips, stories and interviews with regulators, politicians, drivers and base owners. In May, her show was moved to Mega 97.9 FM, dramatically widening its reach to include the New York City Metro Area, Connecticut and New Jersey.

La Hora del Conductor airs Saturday mornings from 7:00 am to 8:00 am. Listeners can call in at 212.315.9790, email lahoraconductor@gmail.com or check the show’s Instagram account to participate, comment or tell their stories.

“We started the show back in 2009, to help educate people in the industry about the details of what were, at the time, new accountability rules, and discuss the effects that the Livery Fund was going to have on bases and drivers,” explains Ms. Angeles. “The show has evolved over the years, and our goal now is to offer a clear and precise representation of what everyone in the industry needs to know, as well as looking back at the changes that have happened historically.”

“Above all else, our goal is to help protect the bases and drivers from regulations that could have a negative impact on their ability to conduct business, alert them to any legislation that may threaten the stability of the industry and offer tips to help them adjust to the ever-changing market conditions,” says Angeles.

The show’s roving reporter, Yaneli Sosa, visits bases each week to speak directly to drivers – describing their successes, challenges and answering questions that they may have.

The show was created and originally produced by Fernando Aquino, although the role of producer was taken over by Luis Alfredo Collado when Mr. Aquino was chosen to serve as Press Director for Attorney General, Eric Schneiderman. Collado is a well-known journalist and radio personality in the Hispanic community. Damian Rodriguez, who has over 30 years of experience in the Livery industry, is also a weekly contributor to the show.

According to Ms. Angeles, representatives from Mega 97.9 FM saw real potential in the La Hora del Conductor radio show, which was previously airing on AM radio. Sponsors Fordham Toyota, City Livery Leasing and LimoSys have also been big supporters of the show. Sponsors don’t just support the show financially, according to Ms. Angeles, they offer sound advice on leasing/financing practices, insurance, driver productivity and safety, and legal issues.

“We were very lucky early on to have had the support of Ed McGettigan, Jr. from the American Transit Insurance company,” notes Ms. Angeles. “Although Mr. McGettigan passed away, his support when we were first starting out enabled us to grow and develop into what we are today. We will be forever grateful to him for believing in us.”

“Cira’s show is a must listen for people that work in the Livery industry,” says Ira Goldstein from the Black Car Assistance Corporation and New York Black Car Fund. “She has a wealth of timely information that she provides to her audience, and has access to an extensive list of connections and prestigious guests that appear on her show.”

“The TLC appreciates the role industry-focused shows like La Hora del Conductor play in helping us reach drivers and other licensees with important messages,” said Commissioner Meera Joshi. “They give us a space to clarify rules and programs, and are a far-reaching platform to share important information about licensing, Vision Zero and other paramount topics with our licensees.”

What a Wonderful Life!