At the end of the 2019 legislative session, about a dozen pieces of legislation designed to crack down on stretch limousines were introduced in the Senate and Assembly (referred to this year as the “Baby Ugly” or “Little Big Ugly” in political circles). The bills were prompted by the deadly Schoharie limo crash, which shined a light on the particularly lax regulations that govern the stretch limo industry.

While the 2019-2020 Adopted Budget that was passed back in April of this year tightened New York’s limousine laws with heightened penalties for safety violations by allowing the state to seize the plates of stretch limos that fail inspection, banning stretch limos from making U-turns, mandating GPS and increasing insurance coverage, the Senate Transportation Committee’s recent hearings on limo safety highlighted the need for additional safety measures.

Among the proposed legislative items introduced in the “Baby Ugly” were bills targeted at stretch limos (and other vehicles designed or modified to carry more than nine people) that would make seatbelts and rollover bars mandatory. Other bills were aimed at drivers of these vehicles and would have required fingerprinting, drug and alcohol testing, and a commercial driver’s license to drive altered vehicles, and enhanced penalties for those drivers.

In the end, only two bills passed both houses and are waiting to be “called up” by the Governor. As for the bills that did not make the cut this year, they could easily be re-introduced in the next legislative session. It is unclear which of the bills will actually be enacted, but it is clear that change is underway. This column summarizes which bills made it, which fell short, and what may be on next year’s agenda.

The following bills passed and are awaiting the Governor’s call-up:

Increased Penalties for Drivers for Traffic Violations(S6188/A8172) increases penalties for making illegal U-turns, running red lights, and speeding with a stretch limo or other vehicle designed or modified to seat nine or more passengers, including the driver. The bill expands the U-turn ban created in the 2019 Adopted Budget to cover any commercial passenger motor carrier with a seating capacity of nine or more passengers, and increases the penalties to less than $250 and/or a maximum of 15 days in jail for the first offense, with additional increased penalties if there are passengers in the vehicle, and for repeat violations within 18 months. The same penalties apply for running a red light with a vehicle that seats more than nine passengers. Drivers of such vehicles convicted of speeding are subject to the enhanced penalty scheme that currently applies to repeat offenders. The enhanced penalties apply regardless of whether the driver transports passengers for compensation.

Mandatory GPS for Limos(S6187/A8171) requires stretch limousines to use commercial global positioning system (GPS) technology that is specifically designed to assist navigation of commercial vehicles, which includes finding routes that accommodate the minimum clearance and turning radius of the vehicle, and which can transmit certain real-time data to the limousine operator’s employer. For the purposes of this law, “stretch limousine” means an altered motor vehicle having a seating capacity of nine or more passengers, including the driver, transporting passengers for compensation.

What didn’t make the cut this year?

Many of the below bills seek to enact licensing standards that are already in place for drivers and vehicles in NYC regulated by the NYC Taxi & Limousine Commission (TLC). However, some of these requirements seek to expand the rigorous licensing standards for limousines that exist in NYC to all other parts of New York State.

Driver Drug & Alcohol Testing(S6186/A712) requires that drivers of any for-hire vehicle with a seating capacity of nine or more persons, including the driver, be subject to both pre-employment and random drug and alcohol testing. It would also prohibit motor carriers from requiring or allowing these drivers to operate a vehicle if the driver appears to have consumed drugs or alcohol within the previous eight hours.

Fingerprinting (S6190B/A3286) requires that applicants for a taxicab, limousine, commuter van, paratransit, or for-hire vehicle driver or owner licenses for vehicles transporting nine or more passengers must be fingerprinted by the authority authorized to issue such licenses for the purpose of securing criminal history records from both the state division of criminal justice services and the FBI.

Commercial Driver’s License Required(S6192) changes license requirements for stretch limousines so that a commercial driver’s license (CDL – P endorsement) will be required to operate an altered vehicle that seats nine or more passengers including the driver. A CDL is required even if the driver does not transport passengers for hire.

Seatbelt & Rollover Protection Devices(S6191) require that vehicles designed or modified to carry nine or more people for compensation must have lap and shoulder seatbelts and rollover protection devices, such as cages or pillars, and anti-intrusion bars.

Impounding Stretch Limos with Certain Defects(S6193) allows the New York State Department of Transportation (NYS DOT) commissioner to immobilize or impound stretch limos that have an out-of-service defect or a horn-related defect until the defect is fixed. Vehicle owners will be entitled to a hearing on the impoundment.

NYS DOT Operating Authority(S6192) amends the Transportation Law so that limousines carrying nine or more passengers for hire will be considered commercial motor vehicles required to obtain operating authority from the New York State Department of Transportation. The law lowers the current seating capacity threshold for CMVs excluded from the definition of “sedan” from eleven to nine persons.

Hotline to Report Safety Issues(S6185/A8214) requires NYS DOT to establish a hotline, website, and phone app to report safety and customer service issues with stretch limousines. Stretch limos and other vehicles that are designed or modified to seat nine or more people will be required to displays signs informing passengers how to report issues to NYS DOT. The bills also require NYS DOT to develop a rating system for customers to assess their limo service.

There is a clear willingness to pass laws to help prevent tragedies like the Schoharie crash from happening again. The likelihood of further regulation in the next legislative session is high. While the Federal government has not completed its investigation into the Schoharie crash just yet, this has not stopped state legislators and the Governor from acting in New York to close loopholes and heighten safety and accountability requirements.

While the Governor has noted that there may be jurisdictional restrictions on what the State of New York can regulate for vehicles that are already regulated by the Federal Motor Carrier Safety Administration (FMCSA), in terms of going beyond federal requirements, there is clearly a commitment to make big changes in Albany. The coordination by and between the NYS DOT, DMV as well as the FMCSA and NYC Taxi and Limousine Commission (TLC) may create additional regulatory requirements coupled with both concurrent and possibly conflicting jurisdictions.

For many years, NYS DOT has registered stretch limousines as buses. This happened as a result of super-stretch coachbuilders trying to evade the passage of laws in the early 2000s by the New York City Council and the TLC, which I had drafted and passed when I was the TLC Chair, to reign-in non-certified stretched limousines. The State is now drawing a distinction between vehicles that are manufactured to seat more than nine passengers and vehicles that are altered or modified to do so. Almost every state in the US, including NY, have passed laws over the last several years loosening and deregulating sedan service provided by Transportation Network Companies, while vehicle regulation of larger for-hire vehicles is going in the opposite direction. The disparities and complexity continues.

For further information about the implications of the Schoharie crash and the history of limousine regulations, I recently authored a comprehensive research article that is published in TRB News, a journal of the Transportation Research Board of the National Academy of the Sciences.

If you or your company representatives have any questions about any of the pending legislation, or would like copies or further analysis of any bills, please feel free to contact me at mdaus@windelsmarx.com, or at 212.237.1106.

After going to print last month, we were told that the FTA chart that ran with this column in July had inaccurate information, recently changed by the FTA. The following is the revised chart: 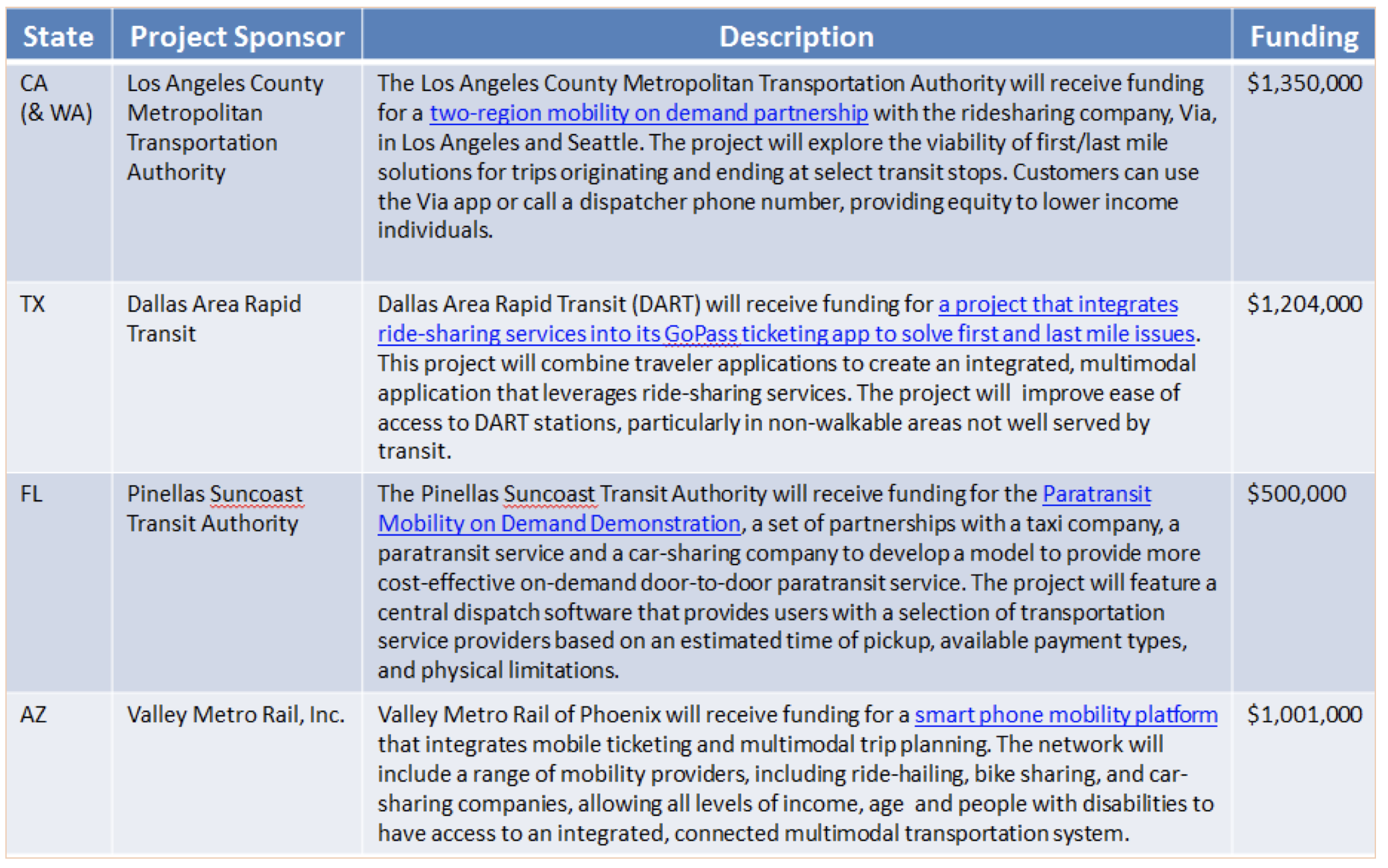