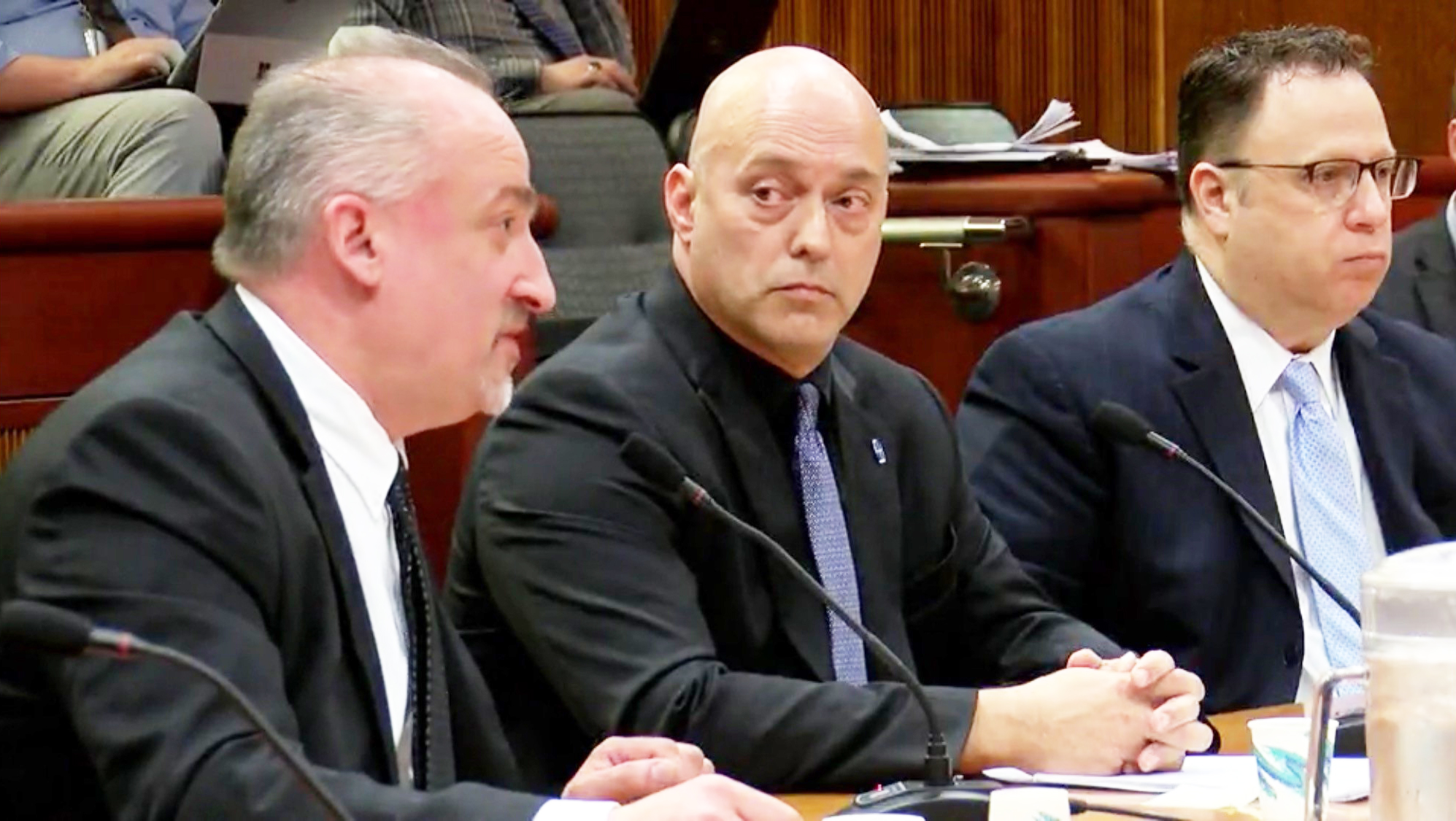 A June 12 article in the Times-Union revealed that, on September 6 of last year, state Department of Transportation (DOT) investigator Chad Smith emailed Nauman Hussain – owner of Wilton-based Prestige Limousine – to let him know he’d asked the state Department of Motor Vehicles (DMV) to suspend the registrations of Hussain’s small fleet of stretch limos. Among the vehicles was a white, 34-foot Ford Excursion limo that Smith had ordered off the road just two days earlier, after it failed a safety inspection in Saratoga Springs.

While the Excursion’s registration was suspended on Sept. 14, DMV records show the agency lifted the suspension just six days later on Sept. 20, for reasons that, according to the Times-Unionarticle, remain unclear.

Two weeks later, the Excursion barreled down a long hill outside the Village of Schoharie, blew through a stop sign, sped through the parking lot of a country store and plunged into a shallow ravine. The driver and 18 passengers were killed along with two pedestrians. The Oct. 6 crash was the worst U.S. road disaster in more than a decade.

Autopsies described “multiple severe traumatic blunt force injuries” as the cause of death for all the victims. Aside from the driver and the two pedestrians, all were friends or relatives of Amy Steenburg, on a trip for her 30th birthday. Members of the group had Tweeted about the poor condition of the limo just minutes before the crash.

The fact that Smith told State Police, in a deposition, that the Excursion’s registration was ordered suspended only a month before the disaster, came to light in a recent court filing by Schoharie County District Attorney Susan Mallery. Her office is prosecuting Hussain on 20 counts of manslaughter and 20 counts of criminally negligent homicide. Hussain is accused of allegedly sending the Excursion out on the road despite knowing it had mechanical and safety issues, and that the driver, Scott Lisinicchia, was not properly licensed.

It’s unclear how important the September suspension and subsequent clearing of the Excursion’s registration by the DMV will be to the criminal case against Hussain. Neither the DMV nor the DOT would explain the reason for the suspension, or what Prestige did to get the Excursion’s registration cleared. Spokespeople for both agencies, and Hussain’s Albany attorney, Lee Kindlon, all declined comment, citing the ongoing criminal prosecution..

Records obtained by the Times-Unionshow that the DOT also requested that the DMV suspend the Excursion’s registration in late February 2018, only to have the suspension cleared in early March. At that time, Prestige had been sent at least two notices of violation by the DOT after Smith documented that the Excursion lacked the proper DOT operating authority.

In April of 2018, Hussain was given a $700 civil penalty for non-compliance on the Excursion and failed to appear before the DOT administrative judge. At that time, the state declined to take the plates, even though they had the authority. This was before they enacted any of the new laws put in place after the accident, through Cuomo’s FY 2020 Executive Budget. Motor Vehicle Laws 140 (section 9) and 145 (section 4) were in place prior to the accident; if they’d been enforced, one might reasonably argue the accident would have been prevented.

Prestige had at least one other outstanding notice of violation from the DOT when the agency requested a suspension in September. Such notices of violation typically include fines up to $5,000, although companies can challenge them in front of an administrative law judge.

It’s unclear if the DOT requested the DMV suspensions, as they waited for the fines to be paid.

Smith failed the Excursion in three roadside safety inspections prior to the crash. The inspections uncovered various safety and mechanical issues that Hussain was ordered to correct before the Excursion could be put back into service. The final inspection took place Sept. 4, during which Smith also inspected two other stretch limos operated by Prestige.

“On Sept. 6, 2018, I sent an email to the carrier about an outstanding notice of violation and that the registration of his vehicles were scheduled for suspension,” Smith said in his Oct. 10 deposition to State Police. “Later that day I sent an email with a passenger carrier information packet. I received a response that [Prestige] would follow up in the morning to get it situated.”

Smith says he had several other interactions with Hussain in the weeks that followed, seeking various documents required for proper certification from the state. Smith said he called Hussain on Oct. 5 – the day before the crash – reminding him he was still seeking some of those documents, including drug and alcohol testing results of the company’s drivers.The Times Unionreported in April that a post-mortem toxicology report on Lisinicchia, the limo driver, found a “significant” amount of marijuana and traces of anti-seizure medication in his body at the time of his death. Smith said in his deposition that Hussain told him he would get him the information by the following Monday – Columbus Day.

The Times-Union reported that Ronald Barton, a former state commercial motor vehicle inspector who retired from the DOT in 2014, suggests the agency shares responsibility and should have done more to prevent the crash from happening. He is asking the state inspector general’s office to examine the role his former agency played in the Schoharie limo crash.

“The actions of certain employees of the NYSDOT continued to allow Prestige Limousine to transport passengers for hire after being found in egregious violation of New York state transportation laws/regulations,” Barton, who worked at the DOT for 25 years, wrote.

A spokesman for Inspector General Letizia Tagliafierro said their office reviews all complaints it receives. DOT spokesman, Joseph Morrissey, lashed out at the complaint, saying, “The baseless claims made by this disgruntled former employee aren’t worth the paper they’re printed on. This individual last worked for DOT five years ago and would have absolutely no first-hand knowledge of the circumstances of this criminal case.”

Barton responded that his claims “are not baseless” since they come from more than two decades of experience enforcing state transportation laws and regulations, adding that, “Disgruntled former employee would not be an accurate description. A more accurate description would be someone who lost confidence in the New York state Department of Transportation to effectively apply the laws, rules and regulations pertaining to the safe transportation of property, passengers and hazardous materials.”

According to records, Prestige purchased the 2001 Excursion from another limousine company in 2016. The first time Smith encountered the Excursion was in June 2017, when he found that it had been registered with the DMV as an 11-passenger vehicle with Livery plates, despite having previously been registered by the DOT as an 18-passenger with bus plates.

Since the tragic accident, New York’s state Senate and Assembly have been furiously drafting “limousine safety” bills. According to Dave Bastian, Legislative Director of the Limousine Bus Taxi Operators of Upstate New York (LBTOUNY): “Outside of the hearing, they haven’t really sought input from the industry, yet they continue to write bills. A lot of what New York State is trying to do – seat belts for instance – are standard features in Ford QVM vehicles; they are already in most limousines on the road. But some of these other items – like side airbags that work in conjunction with seatbelts – need to be addressed on the Federal level. If passengers are not using seatbelts in a Limousine, the effectiveness of the side curtain airbags could be diminished, and additional injuries could occur. Engineers, manufacturers, the NTSB and motor vehicle safety experts need to be involved, if they are going to explore side curtain airbags; that issue cannot be addressed through the legislative process on the state level.”

Bastian’s association, LBTOUNY, supports bill S6190, which would require fingerprinting and background checks of “taxicab, limousine, commuter van, paratransit or FHV drivers or owners” before the issuance of a license – but LBTOUNY rightfully points out Transportation Network Companies (TNCs) and hotel shuttle drivers should be included. Bill S6186 would require drug and alcohol testing for FHV drivers and motor carriers, which LBTOUNY also supports – but again, the association says TNC and hotel shuttle drivers should be among those tested.

Another bill (S6192) would separate vehicles with a seating capacity of nine or more persons from the category of “sedan” and changes licensing requirements; S6185 would streamline limo safety issue reporting and enforcement; S6188 would increase punishments for certain traffic infractions committed by a limo operator; S5329 would increase insurance limits on limos; S6187 would require use of GPS to account for minimum clearance and turning radius of certain limos when routes are chosen, with real-time data being transmitted to the dispatcher; S6193 addresses rear seatbelts, rear windows and doors, and rollover protection devices.

According to Bastian, LBTOUNY strongly supports bill S6189, which would establish a passenger safety task force, enhancing coordination and uniformity between the state DMV and DOT – but the association would like to see industry experts on the panel, preferably from different regions of the state.

Bastian, several other industry experts and members of families who lost their loved ones all offered testimony at a Transportation Committee Limo Safety Meeting in May.

“It is important for these families to know that we also support strong safety laws and we’re trying to get to the truth, just like them,” Bastian noted. “In January, Gov. Cuomo vilified the entire industry when he presented his FY 2020 Executive Budget, painting the industry as unsafe across the board, as if all operators lack the proper insurance, ignore DOT regulations and disregard safety. Due to one bad apple and the knee-jerk reaction of the Governor, some Western New York Limousine operators were notified by school districts that their limos were not allowed on school property for this year’s proms. Losing revenue from proms and graduations can be devastating to a business that depends on this time of year to make up for slower seasons.”