There are some big changes at the New York City Council this year! Corey Johnson, the new Speaker of the Council, created the Committee on For-Hire Vehicles to oversee the New York City Taxi and Limousine Commission (TLC), which was previously under the purview of the Committee on Transportation. Newly-elected Council Member and former New York State Senator Ruben Diaz, Sr. was tapped to chair the new committee, and former TLC Commissioner/Chair Christopher Lynn has been brought on to serve as its counsel.

The committee held its first public oversight hearing on TLC enforcement practices in the wake of the tragic events of February 5, 2018, when longtime New York City Black Car driver Douglas Schifter committed suicide outside City Hall. Mr. Schifter’s suicide note that he posted on Facebook highlighted his grievances with the current state of the for-hire vehicle industry, which he called a race-to-the-bottom due to the proliferation of licensed vehicles.

Given the recent suicides of Mr. Schifter and two other TLC drivers, and the fact that this was the first hearing of the new oversight committee, I chose to return to the City Council to testify for the first time since leaving TLC eight years ago. A full video of the hearing is available on the Council’s website, and my testimony starts at 03:09:25: https://councilnyc.viebit.com/player.php?hash=a987XLI6PQZu

Council Member Diaz began the FHV Committee hearing by referencing Mr. Schifter’s death and expressing frustration that current TLC regulations, which allowed the unchecked growth of Uber, could lead to such a tragedy. Meera Joshi, New York City TLC Commissioner/Chair, testified first, calling for expanding access to mental health screening and services following Mr. Schifter’s suicide – a call that has been echoed outside the hearing. Ira Goldstein of the Black Car Assistance Corporation recently announced that the BCAC is working with the Independent Drivers Guild to develop a class for drivers dealing with mental health problems and financial issues.

Placing a cap on the number of for-hire Uber vehicles operating in NYC was a frequent subject of testimony and questioning throughout the three-hour hearing on TLC enforcement practices and related issues. Uber entered the NYC market in May 2011, and its impact was heavily felt by the taxi industry in the following years. Between 2013 and 2017, the average independent medallion price dropped by roughly 70%, from $959,737 ($1,160,500 for corporate) to $301,773 ($384,467 for corporate). See Figure 1 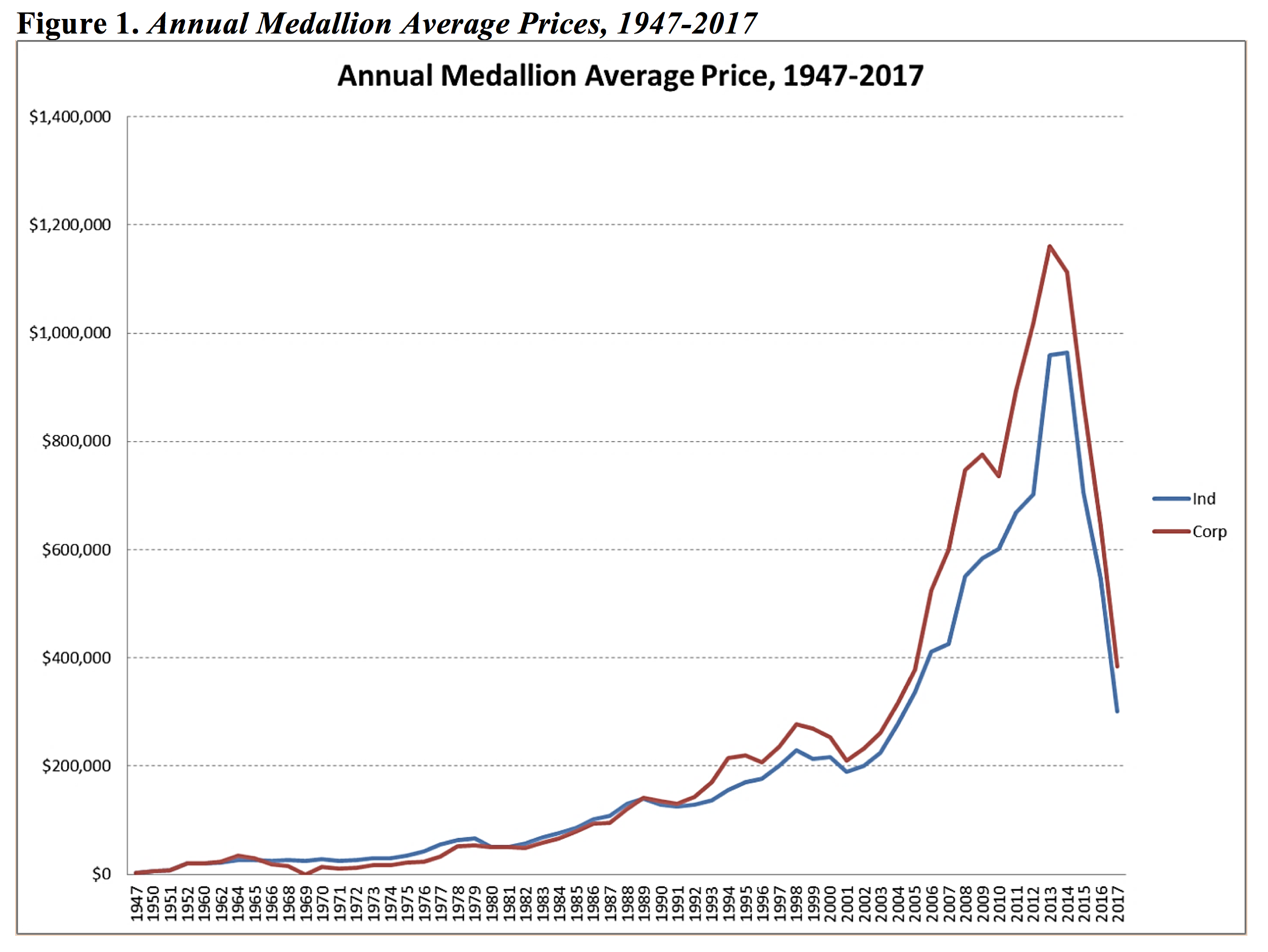 The precipitous drop in medallion prices, after a period of unprecedented and steady growth since the 1940s, stemmed from a steady and gradual decline in taxi ridership and fares. In 2013, the average monthly number of trips was 14,428,020, while in 2017 that number was 9,457,637, a 34% decline. In early 2017, the number of rides originating with Uber, Lyft, and other app-based companies has surpassed taxi rides, so it is no surprise that there are a record number of medallions in storage (approximately 1,000). The average monthly farebox revenue in 2013 was about $193,500,000, and that fell 29% to $137,200,000 in 2017. Also, the number of licensed for-hire vehicles (FHVs) affiliated with Uber’s numerous bases is at a record number of 69,181 (not including FHVs affiliated with other bases using the Uber app), while the total number of taxis is still capped at 13,587. See Figure 2: 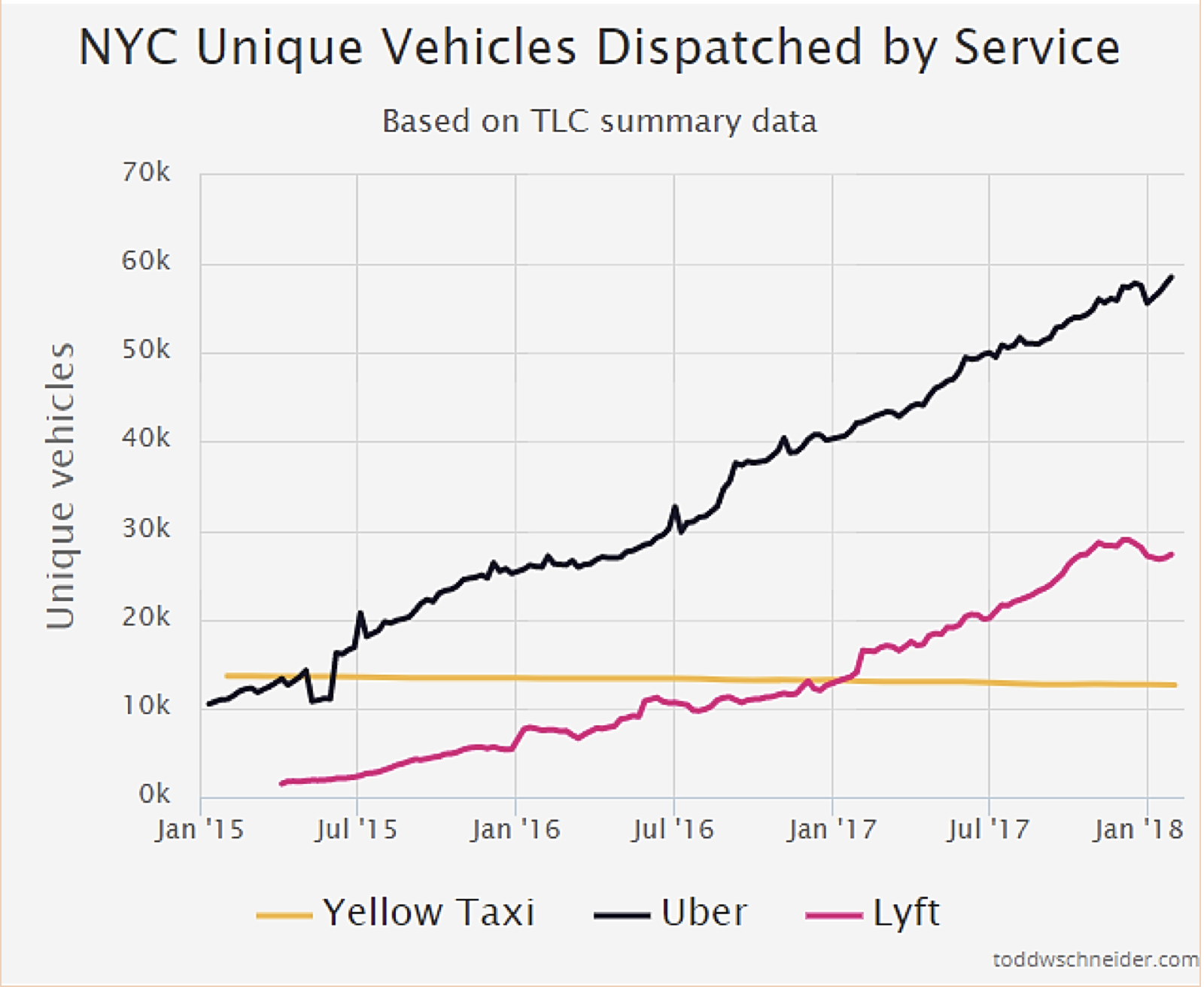 At the hearing, Council Member Brad Lander of Brooklyn asked whether the TLC was considering placing a cap on the number of for-hire vehicles in New York City. Commissioner Joshi responded that the TLC is currently considering a “growth control mechanism” and mentioned that the TLC recommended such a cap several years ago, but the City Council declined to proceed with it. That cap effort collapsed after a large lobbying effort by Uber and a “For-Hire Vehicle Transportation Study,” authored by McKinsey & Company, with the help of sub-consultant Bruce Schaller, that “found” construction and emergency road repairs – not the influx of Uber drivers – were significantly contributing to the congestion in the Central Business District (CBD) of Manhattan. Council Member Ydanis Rodriguez of Manhattan, Chair of the Transportation Committee (which formerly had jurisdiction over the TLC and NYC’s taxis and for-hire vehicles), expressed his support for a moratorium on TLC issuing new for-hire vehicle licenses.

TLC’s enforcement of illegal-street hails and unlicensed drivers also elicited testimony and questioning. Commissioner Joshi condemned the recent attack by livery drivers on TLC inspectors who had stopped an unlicensed driver after seeing him illegally pick up a street hail in the Bronx. Council Member Diaz, who represents a district in the Bronx, questioned Commissioner Joshi about what he perceived as a lack of TLC enforcement against illegal-street hails in his borough. Council Member Daneek Miller, who represents Southeast Queens, voiced concern regarding the dangers of unlicensed commuter vans and also questioned whether the TLC was engaging in “selective enforcement,” stating that he has not seen any enforcement against unlicensed commuter vans in Southeast Queens.

Congress Member Adriano Espaillat testified and created a stir by calling for a complete dismantling of the TLC to replace it with a new agency. He also called for a cap on the number of for-hire vehicle bases and drivers and announced that he would be calling for a U.S. Department of Justice investigation into TLC selective enforcement and “entrapment” procedures.

I wanted to testify at the hearing to highlight the serious problems of surge pricing and unchecked growth in the industry. Douglas Schifter took his life on February 5, the same day as the 1934 New York taxi riots. These two events – eerily occurring 84 years apart to the day – both happened at a time when the industry was experiencing an oversupply of vehicles contributing to economic hardship for drivers. I outlined a three-point plan to set the industry on the right track for improvement. First, there needs to be a growth limitation (or cap) on the number of new vehicles that can affiliate with bases under common ownership that have more than 10,000 cars (or another excessive number identified by the Council). Applying a cap to mega-bases, such as Uber only, address the problem head-on and will not adversely impact small and mid-size base business owners of diverse communities that are already suffering, along with their drivers, due to Uber’s unprecedented growth. The corporate responsibility that comes with well-financed companies like Uber and Lyft, should require that a higher regulatory burden be imposed to demonstrate that drivers are earning a “living wage” (which was accomplished by Mayor Bloomberg’s administration in 2004 for taxi drivers), and that any traffic congestion impacts are identified, measured and mitigated through environmental assessments and impact studies.

Second, surge pricing during rush hour encourages drivers to come out on the road during the worst time possible and should be banned unless rides are being shared. This would help relieve congestion by making better use of the cars that are on the road. Finally, enforcement priority must be focused on unlicensed for-hire drivers. The Council should enact a “one strike and you’re out” law to confiscate or forfeit their vehicles, if the vehicle owners and/or drivers are convicted of operating an unlicensed vehicle for hire. The City also needs to increase enforcement efforts and enlist the help of other law enforcement offices, including the NYPD at precinct levels and New York State Police.

Since the hearing, Council Member Diaz and committee counsel Chris Lynn have begun drafting legislation to address the unchecked growth that app-based for-hire vehicle companies have caused in the industry. The proposed legislation, which has not been formally released as of this writing, is expected to create a new, separate category of for-hire vehicle service for so-called “app-based for-hire services.” Under the proposed law, persons or businesses operating an app-based for-hire service would have to be licensed and pay an annual fee of $20,000 plus $2,000 for every vehicle affiliated with the service. Both the TLC and the City Council would be required to approve each additional license application, much like the approval process for the livery industry. License applicants would need to submit a detailed business plan that demonstrates a need for the service – that is, each vehicle would make, on average, at least 10 trips per day. App-based companies must have actual bases for every 1,000 vehicles and these must be equally dispersed throughout the City. Companies would also need to show that their service will not adversely impact traffic, congestion, or quality of life in New York City. As the bill draft indicates, the service would need to provide a “detailed description of all commissions, lease fees, and other charges or proposed charges” to vehicle owners or drivers. This description would need to include an hourly estimate of drivers’ earnings. As an additional license requirement, at least 25% of affiliated vehicles would need to be wheelchair-accessible.

Moreover, Mayor Bill de Blasio has signaled that he may be ready to take up his fight against Uber again. In January, the Mayor appeared on The Brian Lehrer Show to discuss congestion pricing and the impact of ride hailing services like Uber and Lyft. The Mayor did not mince words, saying Uber “clearly has contributed to the congestion problem in New York City” and that it is “abundantly clear” that the company has been “very exploitative” and “very unfair.” While City Hall’s precise action seems to depend on what – if anything – Albany does to address the congestion problem, the Mayor conceded that the city needs to overhaul its current approach to regulating the for-hire vehicle sector and figure out how to reduce the number of empty Uber vehicles on the streets.

The death of career driver Douglas Schifter may be the catalyst for changes that did not happen a few years ago with the congestion plan. It is so very sad that this problem has gotten so out of hand that drivers would actually take their own lives. Suicide is never an answer, and instead, drivers should take to the streets and call their legislators to take action to ensure Mr. Schifter’s passing and plight was not in vain. It is certainly obvious that, with the average vehicle speed in Midtown now less than 5 mph, something needs to be done. It is unknown what the final proposed legislation will contain, if it passes at all, as industry stakeholders have likely already begun their lobbying efforts.