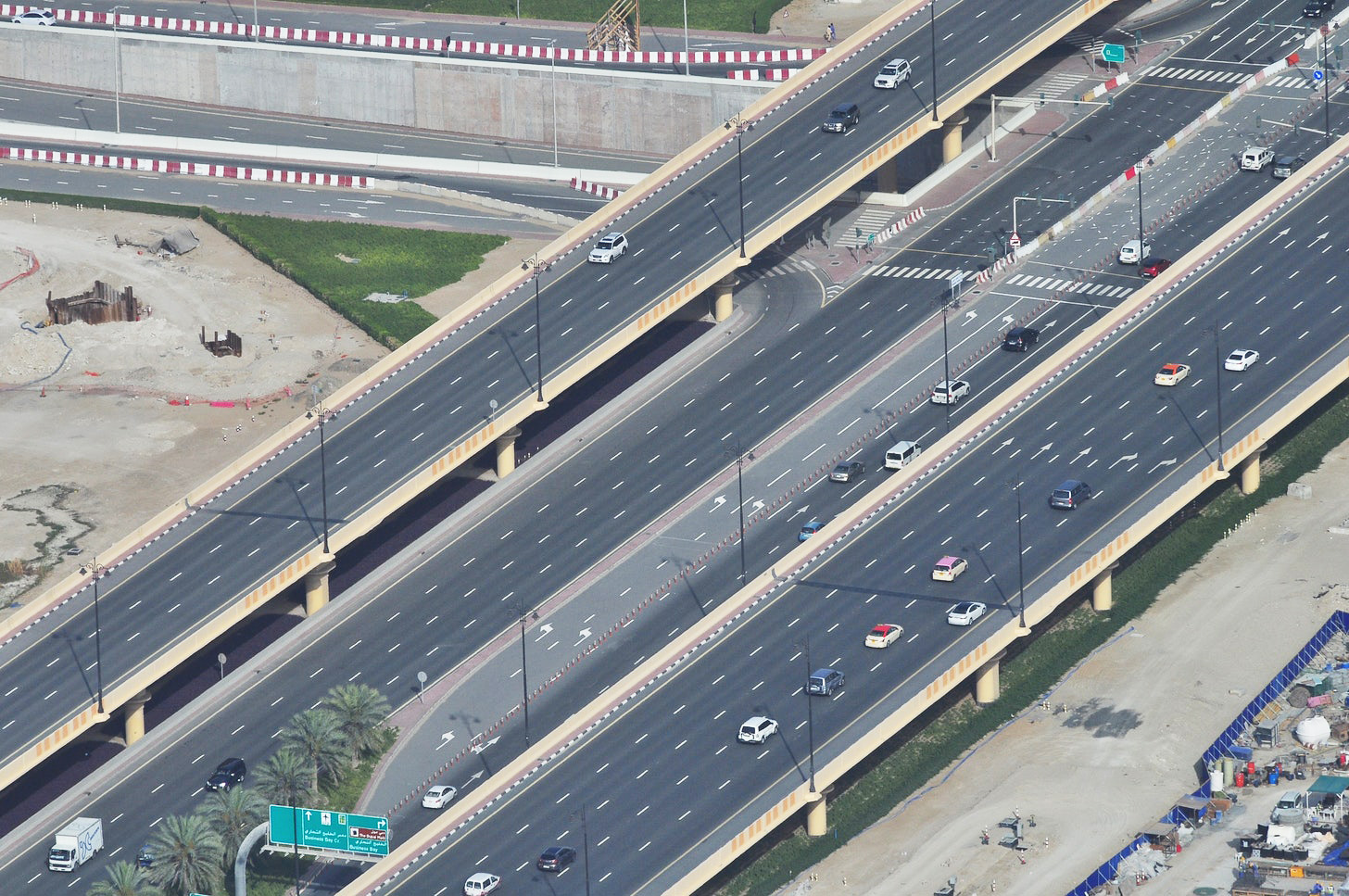 Many fleet owners and drivers in NYC’s for-hire industry likely have an E-ZPass story. How a few unpaid tolls resulted in hundreds, thousands and even tens of thousands of dollars in violation fees. In fact, I have many of my own stories until I created a system. That being said, not everyone has the time to figure out how to protect against E-ZPass violations and may also not realize there is a limited time frame in which to act. While everyone should and needs to pay tolls, thousands of dollars in penalties for failing to pay several tolls seems excessive, especially when someone is offering to pay any outstanding toll amounts in a timely manner.

E-ZPass
The E-ZPass Group, founded in 1987, is an electronic toll collection platform. The company is now comprised of toll entities across 18 states with over 25 million accounts and 41 million E-ZPass devices in circulation. Today, the E-ZPass Program is the largest interoperable toll collection program globally, having collected billions in electronic toll revenues. Interestingly, the Tri-State area around NYC represents a large portion of the toll revenues collected via the E-ZPass system.

In 1990, seven toll facilities from the states of New York, New Jersey and Pennsylvania joined to form an alliance known as the E-ZPass Interagency Group (IAG). These seven agencies represented almost 40% of all U.S. toll transactions and nearly 70% of all U.S. toll revenue. This unprecedented cooperative effort included representatives from the New Jersey Highway Authority (operator of the Garden State Parkway [since merged with the NJTA]), the New Jersey Turnpike Authority (NJTA), the New York State Thruway Authority, the Pennsylvania Turnpike Commission, the Port Authority of New York and New Jersey, the South Jersey Transportation Authority (operator of the Atlantic City Expressway), and the MTA Bridges and Tunnels. – E-ZPass

While NYC for-hire drivers may deal, at some point, with many of the agencies above they will mostly cross tolls associated with MTA Bridges and Tunnels, Port Authority of New York and New Jersey and the New Jersey Turnpike Authority. Combined, these three agencies essentially control and manage all major air, land, rail and sea transportation infrastructure in NYC and its surrounding areas.

The Port Authority of New York & New Jersey (PANYNJ) is jointly controlled by the governors of New York and New Jersey, who both appoint the agency’s Board of Commissioners. Financially speaking, the Port Authority has no power to tax or receive tax money, but operates on the revenues it makes from rents, facilities, tolls and fees. In its 2020 budget, the gross operating revenues and core operating expenses for the Port Authority are estimated to be $5.8 billion and $3.4 billion, respectively. Tolls, including violations, make up over 30% or about $1.8 billion of total budgeted 2020 revenue. It should also be noted that total Tunnel, Bridges & Terminals (TB&T) capital spending (i.e. not included in operating expenses) for 2020 is set to be $739 million, including $266 million for the George Washington Bridge and $234 million for the Lincoln Tunnel. 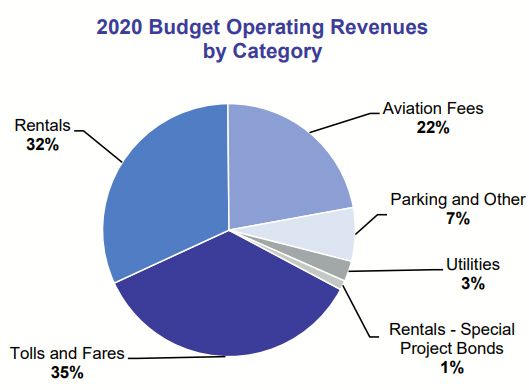 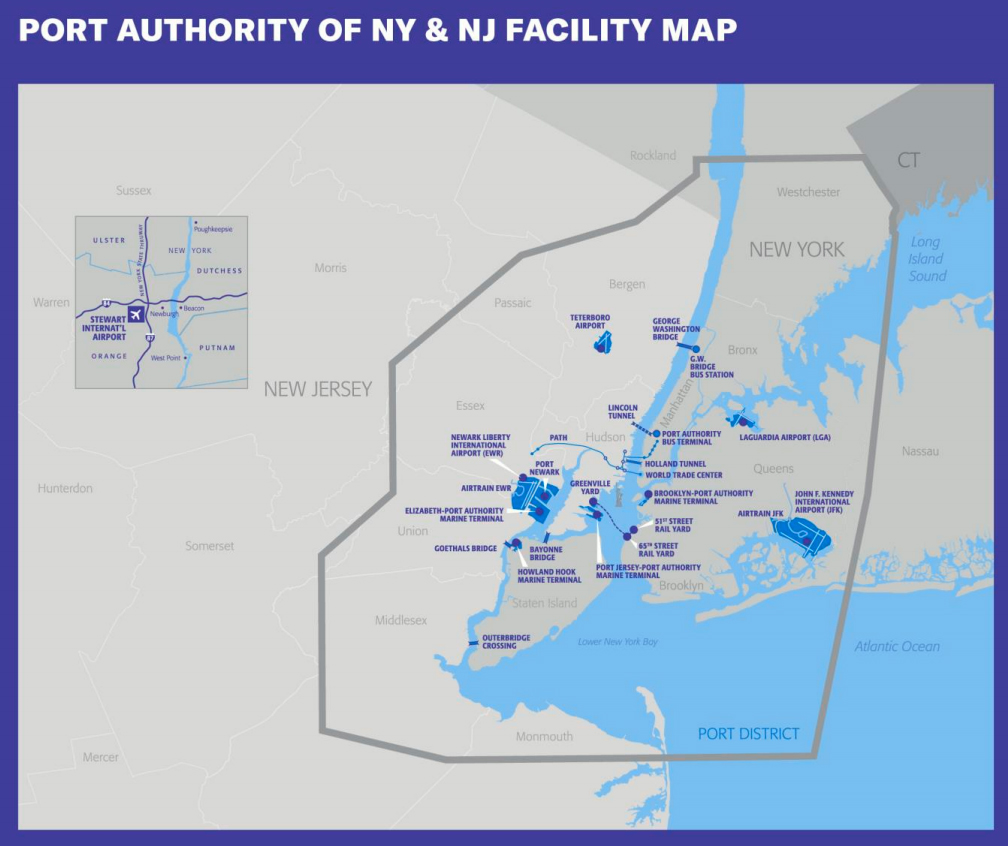 MTA Bridges and Tunnels (B&T) is an affiliate agency of the Metropolitan Transportation Authority (MTA). The MTA is the largest public transport authority in North America and is funded by a mix of tolls, farebox revenues (i.e. subway, buses and trains) and state & city taxes and subsidies. It took in $16.7 billion of revenues in 2019, but is currently suffering through a well-documented financial crisis, running multi-billion dollar deficits. Over 50% of its expenditures is spent on paying its ~70,000 workers, including their salaries, overtime, retiree pensions and healthcare. 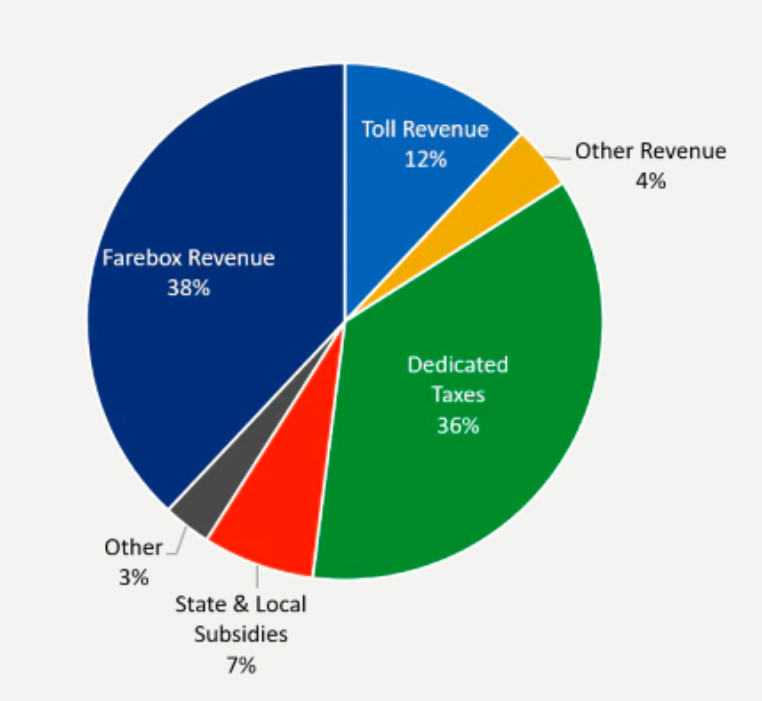 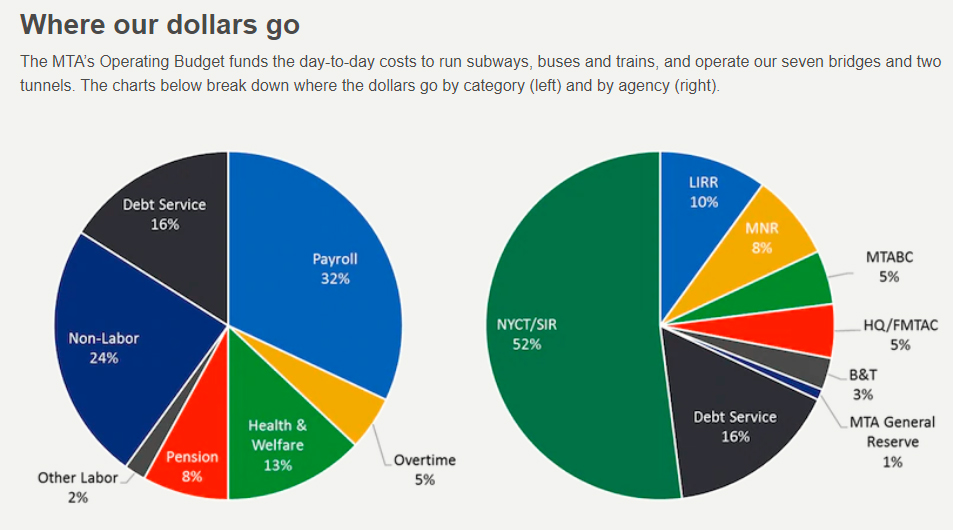 The New Jersey Turnpike Authority (NJTA) is a state agency responsible for maintaining the New Jersey Turnpike and the Garden State Parkway. The Turnpike is a limited access toll road that serves as part of the I-95 corridor linking the major economic centers of the East Coast. It consists of a 122-mile mainline and two extensions. The Parkway is a 173-mile limited access toll road with connections in the south to Route 9 near Cape May, New Jersey, and in the north to the New York State Thruway at the New York-New Jersey border near Spring Valley, New York. The vast majority of 2020 NJTA budgeted revenue of $1.9 billion comes from tolls and fees. It also estimates $600 million in operating expenses, leaving it with $1.3 billion to service debt and capital projects. 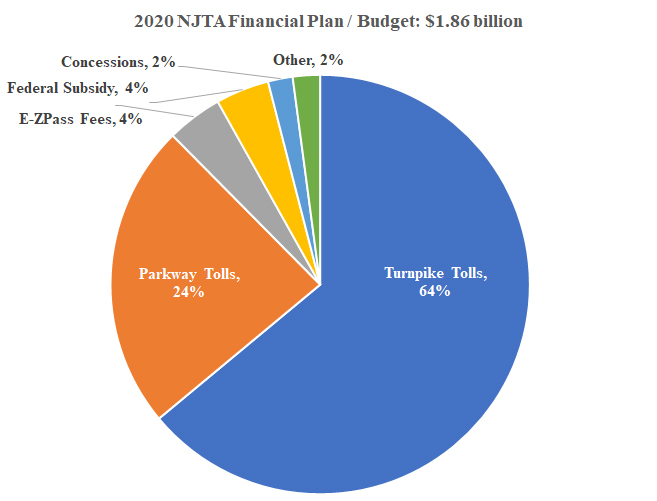 Now that we have a brief overview of the key organizations that manage, control and are funded by NYC-area E-ZPass tolls (and violations), let’s get into the main issue that many TLC fleets and drivers are dealing with – excessive violation fees on unpaid tolls. Let me reiterate that I am not arguing against the actual tolls, but rather the excessive violation fees associated with not paying tolls, especially when unpaid tolls arise from mistakes such as faulty E-ZPass transponders or forgetting to update credit card details. In fact, I am for violation fees being used as a deterrent to those who may abuse the system, but this must be within reason.

To their credit, Port Authority, MTA and NJTA allow rental fleets to transfer unpaid tolls and violations, within a few months time frame, to drivers that are renting from them by faxing a written letter, renter ID and providing a signed copy of a rental agreement. However, that still doesn’t negate the fact that the driver is ultimately subject to hefty violation fees. I included real examples of violation fees

(Note: The COVID pandemic did not stop the violation fees, although TLC fleets and drivers only way of effectively knowing about unpaid tolls that they owe is through receiving mailed notifications. Collecting mail from NYC offices was near impossible from mid-March to mid-May.) 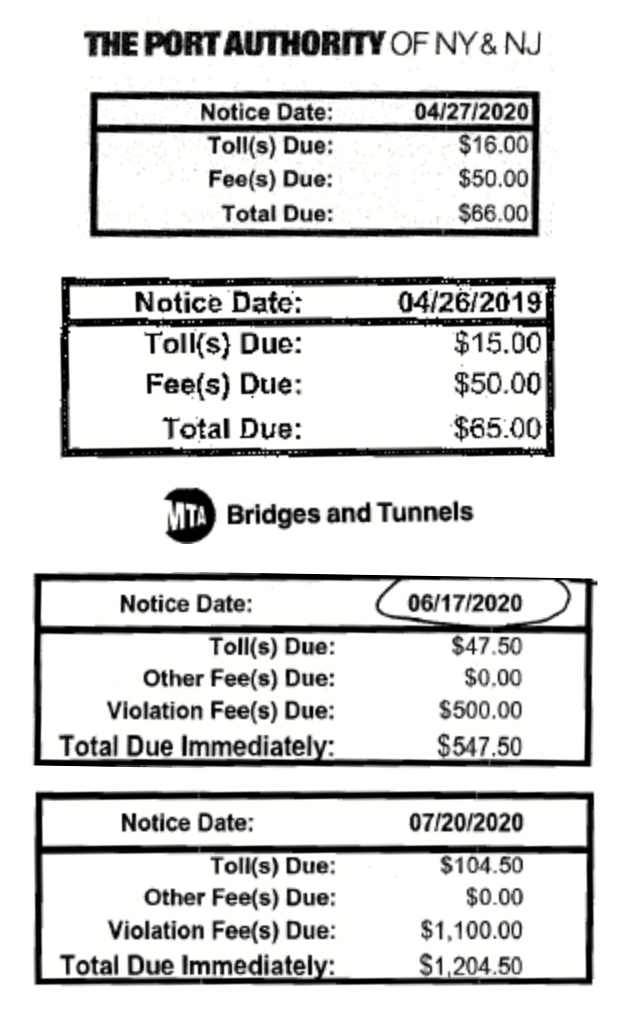 It appears three out-of-state firms are used to collect unpaid tolls and violations. Now some may think the collections process may only begin after an extended period of time passing (i.e. 6 months to a year) and when the actual toll amount still hasn’t been paid, but that would be a mistake. For example, The Port Authority often uses California-based debt collector Alliance One and in the below example, three month old tolls that have already been paid are still subjected to collections on the violation fees! 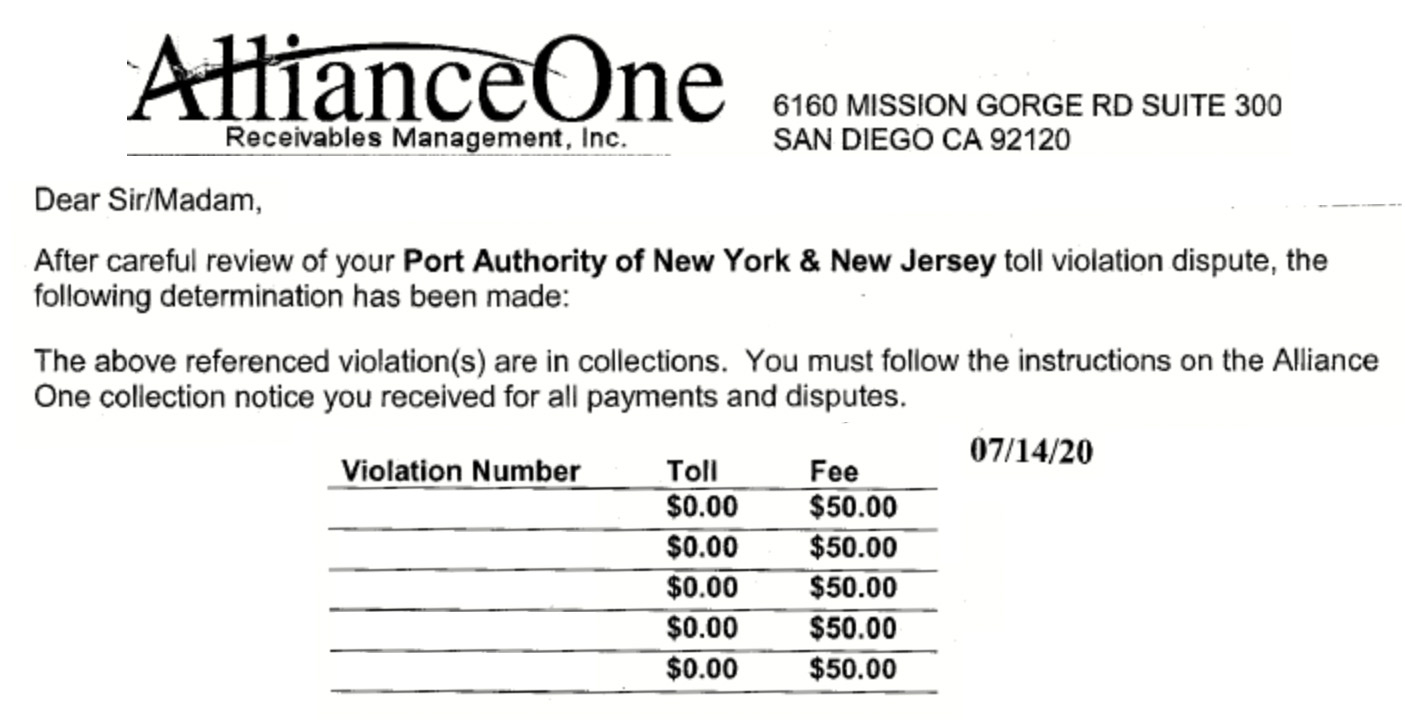 Every driver, whether professional or not, must pay tolls – this is without dispute. However, unlike most commuters that may be passing through tolls a few times per day at most, TLC fleet cars and drivers are subjected to tolls hundreds of times per month. In the event of an E-ZPass error or oversight related to an E-ZPass account, that may result in thousands of dollars of violation fees even within a few weeks. In addition, overly aggressive collections tactics where the institutions involved have the power to suspend a vehicle’s registration (i.e. stop someone from operating their business) in order to collect violation fees, even if the tolls are paid, in my view, raises questions.

The above system and violation fees have increasingly got more media and political attention, even a class action lawsuit. In fact, towards the end of 2019 both New York State and New Jersey established Toll Payer Advocate offices. This came after the Toll Payer Protection Act (S6113A/A7587A) was vetoed by Governor Andrew Cuomo after passing the State Legislature (this is the second year in a row the Governor vetoed the Act).

The legislation would have eliminated excessive fines, allowed drivers to sign up for text or email alerts, notifying them of outstanding bills, allowed drivers to dispute fees more easily online and before a judge and set up a monthly payment plan. Further, unpaid toll bills could not go to collections until a year passed or the outstanding debt was $1,000, and a driver’s registration would not be suspended due to unpaid toll bills. The legislation was prompted by numerous drivers who contacted Sen. Carlucci’s office after racking up thousands of dollars in toll bills due to unfair penalties and fees.

“The Toll Payer Advocate offices are a great step in the right direction. I think the Governor has heard our concerns. The Toll Payer Advocate will make the necessary improvements that I have been fighting for like streamlining the process for drivers who receive bills from multiple tolling authorities. Customer service goes a long way, and these offices should make it easier for customers to resolve disputes. I am also pleased to see that now toll bills will be sent to customers within 10 days. I look forward to continuing to work with the Governor to ensure no toll payer falls through the cracks.”

While progress is being made, we believe it’s time for the NYC for-hire community to come together to help address this issue, which is likely causing many individual TLC drivers and fleets significant stress.

Until rules around charging excessive toll violations are changed, unfortunately fleets and drivers will need to deal with the status quo. At TLCMKT we offer E-ZPass management services. If you are interested in our services get in touch at [email protected]