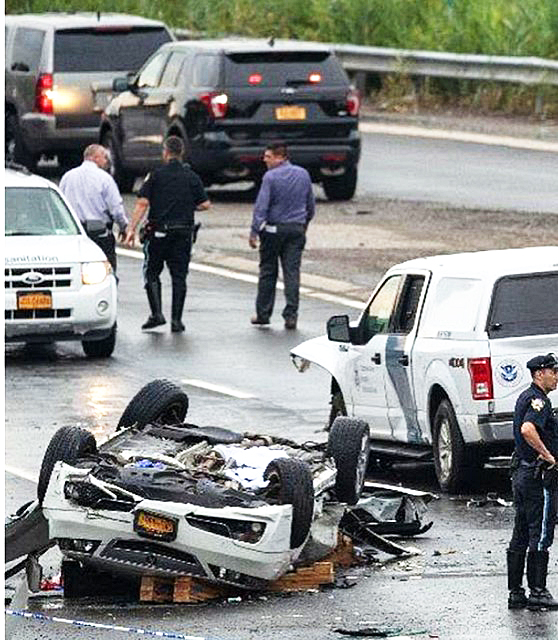 A fatal car crash in August 2018 on the Van Wyck Expressway. One person died in this seven-car crash.

I’ve been driving professionally for more than four years. Nearly every day, I see at least one crash. Most of the time, the cause is predictable: distracted driving.

Distraction causes destruction. Whether it’s because you’re reaching to tune the radio, grab a drink or – worse – talking on a mobile phone… or – the worst – texting while driving!

According to the National Highway Traffic Safety Administration (NHTSA), 37,461 people died in traffic crashes in 2016 in the United States (latest figures available), including an estimated 10,497 people who were killed in drunk driving crashes involving a driver with an illegal BAC (.08 or greater). Among the people killed in these drunk driving crashes, 67% (7,052) were in crashes in which at least one driver in the crash had a BAC of .15 or higher.

According to the NHTSA’s 2016 data, an average of 102 people were killed every day in car crashes. That’s more than four people an hour… more than one person every 15 minutes!

Although the number of deaths, and deaths relative to the total U.S. population, declined over most of the previous two decades, the trend reversed in 2015 and continued to trend upwards in 2016.

I’ve been rear-ended twice on the job, both times by drivers distracted by their phones.

Consider this: Texting for a few seconds is comparable to driving the length of a football field (100 yards) blindfolded. Scary! Even glancing down to check Google Maps or Waze is risky because this takes your eyes off the road just long enough to crash.

Before I meet and greet my passengers, I study the route to our destination on my iPad and try to commit the directions to memory. This helps me be better prepared and confident. Most importantly, knowing the route reduces the number of times I have to look at my iPad and succumb to this unnecessary distraction.

By simply planning ahead, giving yourself a little extra time to prepare your route to your next destination, you may be able to avoid a distraction that could cause destruction.

Back to School, Avoiding Danger and What to do if an Accident Occurs

The Next Fight: Fair Lease Prices

Business Trips Can be a Great Chance to Detox