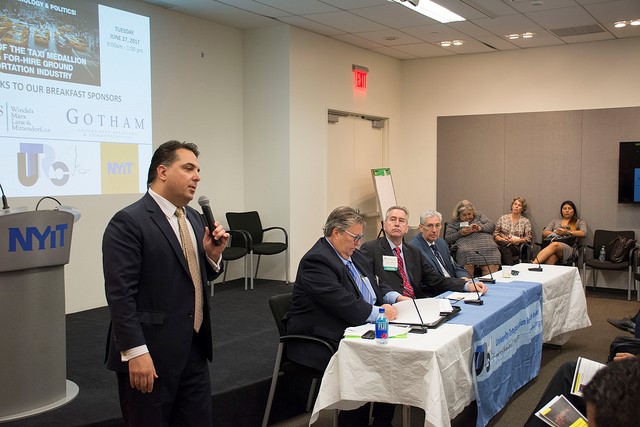 On June 27, 2017, I organized and moderated a forum entitled “Disrupted by Technology and Politics: The Future of the Taxi Medallion System & For-Hire Ground Transportation Industry.” The forum was hosted by the University Transportation Research Center (UTRC) of the City University of New York, at New York Institute of Technology (NYIT). This is UTRC’s second summit on this topic; the first one was held almost exactly two years ago. The program this year focused on the state of the NYC taxicab and For-Hire Vehicle (FHV) industries, and included sessions on medallion values and market trends, technological enhancements and equity.

A link to the full series of all videos, photos and the program can be accessed at http://www.utrc2.org/events/second-summit-taxi-medallion-system.

The opening keynote speech was delivered by NYC Council Member Ydanis Rodriguez, Transportation Committee Chair. The Chair’s speech set forth a blueprint of action items that expressed his desire to level the playing field for the taxicab industry, including the following highlights:

• A mandate for a fixed percentage of FHVs to be wheelchair-accessible;

• Legislation requiring environmental impact studies to be carried out before additional FHV licenses are issued;

• A hearing to discuss the “Taxi of Tomorrow” and other vehicle improvement plans to be scheduled in Fall 2017;

• Forming a “Blue Ribbon” commission composed of industry experts and economists to review the medallion’s lost value and to issue recommendations by the end of this summer.

The first forum panel, entitled “The Future of the NYC Medallion System,” discussed concerns surrounding the current state of the taxicab industry. According to David “Taxi Dave” Pollack, President of the Taxicab Service Association, one of the reasons cab drivers are leaving the industry is due to vehicle inequality: they need to comply with the NYC TLC’s 50% accessibility mandate and yet are not allowed to drive hybrid vehicles which will save fuel. “Taxi Dave” Pollack also added that congestion in NYC is becoming an ever-present problem with 30% less space on some streets due to the unchecked growth of FHVs. Thomas O’Shea, CEO of Aspire Federal Credit Union, added that the vast majority of the medallion owners are working hard to make their loan payments, even in light of a revenue decline of 10-15%. The key challenge, though, is for them to find a second driver, especially if the taxi is wheelchair accessible. O’Shea believes that a universal taxi app may bring back many of the consumers who have switched to app-based services, and that drivers should not lose sight of lowering the cost of operation, i.e. the use of hybrids, credit card processing, meter management, etc. On app-based companies, O’Shea commented that New York City should impose the same vehicle inspection and safety standards that exist for yellow cabs. Robert Familant, CEO of Progressive Credit Union, emphasized that the collapse of the taxi driver pool is the main cause of the cash flow loss. Regulatory changes are therefore required to curb the exodus of taxi drivers to ride-sourcing competitors. The numbers alone paint a clear picture: there are roughly 100,000 TLC-licensed vehicles, but only 13,500 are yellow taxis today. Simply put, the government has failed to protect the franchise it helped to create, according to Familant.

In the second panel session, entitled “Medallion Industry Technology & Service Enhancements,” Jason Gross, VP and Global Head of Product and Marketing at Verifone Taxi Systems and Alex LaVoie, General Manager of Via, discussed their latest collaboration to enable ridesharing for yellow cabs. According to LaVoie, it is a win-win scenario: cabs benefit from more customers while Via benefits from the $1.95 service fee. On the e-hail mechanism of the ridesharing, Gross explained that Curb app users are matched exclusively to yellow cabs, but Via app users can be matched to either a cab or a Via vehicle. Via’s technology is currently deployed in over 65 cities in the U.S., and LaVoie is hoping that Via will be granted access to areas in airports and bus lanes in the near future.

The third panel, entitled “Leveling the Playing Field – Equity, Accessibility & Labor Issues,” discussed several important topics such as equity, accessibility, and sustainability. The common consensus is that the NYC TLC budget is not enough to properly regulate the industry and provide adequate enforcement. According to Jim Conigliaro, Jr., the Founder of the Independent Drivers Guild (an organization representing drivers that signed an agreement with Uber to provide basic worker protections), there is an estimated 750 new FHV drivers each week, which is clear evidence of the high turnover rate of the industry. Also, Uber’s recent mishap of under-paying their drivers is a big problem and it was suggested that the government should ensure that Uber is now paying the drivers back appropriately. On issues pertaining to accessibility, Edith Prentiss, the Chair of the Taxis for All Campaign, highlighted many problems with the Access-a-Ride program and the inability of accessible vehicles to fit more than one additional passenger. Patricia Gatling, the former NYC Human Rights Commissioner & Deputy Secretary for Civil Rights to NY State Governor, stressed that the ride-sourcing business model does not provide adequate service to low-income minority, rural, unbanked and technologically-deprived communities. On environmental issues, Commissioner Gatling disclosed the latest estimated carbon emissions from FHVs – up by 2.6 times from last year. These points, along with other seminal findings, can be found in a university report entitled The Expanding Transportation Network Company Equity Gap (http://www.utrc2.org/sites/default/files/Equity-Report-FINAL-11232642.pdf).

I suggested a solution that everyone agreed with, including the panelists and audience, to solve the accessibility problem in the short term. First, eliminate any passenger fare-funded subsidies and have the MTA subsidize all vehicle retrofits, driver wages, and insurance costs with the many millions of dollars in savings resulting from Access-A-Ride using all wheelchair-accessible taxicabs, green borough cabs, and liveries/sedans as part of one system, instead of multi-passenger vans. For example, the average taxi fare ranges from $15-20 per ride versus the current $60 per passenger subsidy for Access-A-Ride vans. This unified system would use one on-demand smartphone app and one prearranged phone number and all passengers would pay the NYC bus and subway fare, not the metered fare.

A fourth panel heard from independent medallion owners/drivers, directly addressing many of the concerns expressed by the prior panelists, validating firsthand the impact that the uneven playing field has had on their livelihoods. Finally, for the closing remarks, Nora Constance Marino, a Commissioner from the TLC Board, assured the audience that she is in agreement concerning the need for equity in regulation. Specifically, both taxicabs and FHVs should be subject to the same standard of environmentally-friendly cars and wheelchair accessibility along with proper background checks for drivers. Commissioner Marino echoed the trepidation that all of the panelists from the fourth session have expressed: that they were sold on a false promise that the TLC would properly regulate and protect the taxi industry. Commissioner Marino felt that that the promise has not been kept even though the TLC Chair has made several regulatory changes over the years. Commissioner Marino went on to explain her history of protecting the taxi industry as a lone dissenter on the Commission, including her sole vote against approving the Nissan NV200 as the Taxi of Tomorrow. In parting, Commissioner Marino expressed that she would be willing to hear any proposals or solutions people have to protect the taxicab industry and requested anyone with concerns to reach out to her directly.

The goal of this forum was to bring together stakeholders, including the representatives of interest groups and individual drivers, with government officials, banks/credit unions, and academic researchers, to identify practical solutions to be presented to policymakers. The forum clearly identified the need to act on old ideas and new solutions for consideration, and even had a major announcement on concrete NYC policy plans and legislation by Transportation Chair Rodriguez. Not only during the pendency of this forum did Uber change its policy on allowing passengers to tip drivers, but the TLC announced it was taking action on the tipping rules immediately, with a public hearing scheduled for July 13, 2017 (http://www.nyc.gov/html/tlc/downloads/pdf/proposed_tipping_rule_promulgated.pdf); and another hearing on proposed FHV accessibility rules scheduled for September 21, 2017 (http://www.nyc.gov/html/tlc/downloads/pdf/proposed_req_wheelchair_accessibility_6_30_17.pdf). This is going to affect everyone in the industry, so it is quite unfortunate that Uber and Lyft declined to participate at the forum. In any case, continue to have your voices heard, stay involved and keep thinking about how we can continue to keep the NYC taxicab and for-hire vehicle industry the best in the world!

What a Wonderful Life!