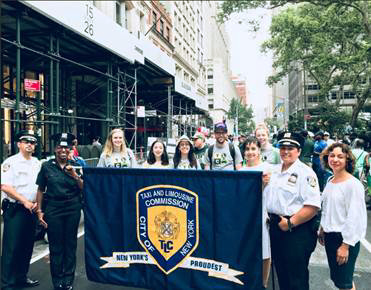 Cabbie to the rescue

A hero taxi driver helped catch a Manhattan bank robber in July. The suspect stole $500 after passing a bank teller a note, according to police, and then hailed a cab. The police contacted the driver, Mr. Thierno Diakhate, after getting in touch with his garage, who met them and then took them to where he had dropped the suspect.

“We saw her try to get into another cab,” Mr. Diakhate told the New York Post.

Police made an arrest and charged the alleged perpetrator with robbery. TLC-licensed drivers like Mr. Diakhate are the eyes and ears of our city, and often do a great deal, quietly and behind the scenes, to keep New Yorkers safe.

“I followed the slogan if you see something, say something,” he said.

We look forward to honoring Mr. Diakhate at our Aug. 2 Commission Meeting and recognizing his achievements. When he is not helping the police catch suspected bank robbers, Mr. Diakhate is a senior at Brooklyn College, where he studies accounting.

Many TLC staff members and their families marched in the Disability Pride Parade last month. The theme was express yourself, and we enjoyed the creativity of those who took part. The parade travels between Madison Square Park and Union Square Park.

This year, we celebrated the increasing number of wheelchair-accessible taxicabs in New York City, which has risen to about 2,400, as well as our now-citywide Accessible Dispatch Program. The TLC also increased the amount that taxi drivers receive for trips in wheelchair-accessible vehicles, from $.50 to $1, in addition to the metered fare. As part of the for-hire vehicle rules that the TLC approved last year, as well as a recent legal settlement, we anticipate a long-overdue increase in the number of wheelchair-accessible black and livery cars. We are appreciative of the work of the drivers and those who work in the industries we regulate to make our city a more accessible place for all.

Last month, two economists released a study contracted by the TLC from the New School’s Center for New York City Affairs. The economists examined and analyzed the current earnings of drivers in the for-hire vehicle sector now. It drew upon the most extensive data on ride app companies ever provided to academic scholars, including rides, fares, driver pay and hours.

Using this data, the economists found that driver pay is low in the for-hire vehicle sector, due to a large pool of available drivers that reduce the number of trips per hour and driver pay. About 85% of ride app drivers currently earn less than the equivalent of the $15 an hour minimum wage, and would need a 22% increase and earn more than an additional $6,000 per year to meet it.

The TLC is working with the City Council and the industries we regulate to address the economic challenges of drivers, and we greatly appreciate the feedback from drivers and other licensees on the report.

Recent Developments in Laws Prohibiting Discrimination Based Upon Sexual Orientation

Evaluation of the Proposed Earnings Standard