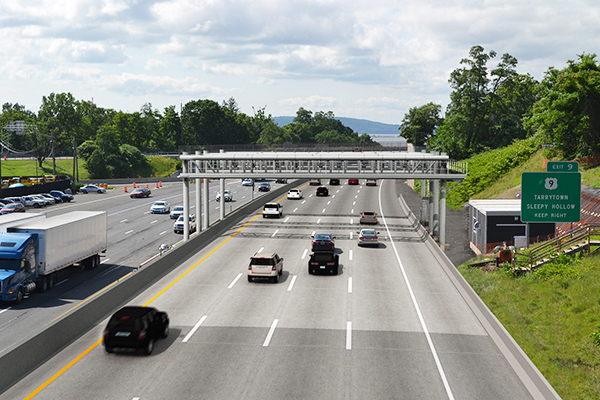 The New York State Thruway system is transitioning to cashless tolling this month. Its tollbooths have been replaced by a network of electronic tolling monitors – 70 steel columns, known as gantries, that tower over the lanes at 58 points in the 420-mile ticketed system. There are also double sets of cameras that take photos of front and back license plates as vehicles whiz by underneath. Treadles in the road measure the number of axles, and there’s a height sensor.

There won’t be any more toll booth transactions once the switch is made.

Thruway Authority executive director Matt Driscoll said those with E-Z Pass will continue to have their tolls deducted from their accounts at the same rate as before. For those without an electronic toll tag, a bill will be sent to the address listed on the vehicle’s registration.

“We are asking people to recognize the importance of getting an E-ZPass,” said Driscoll. “Because it’s going to save you money.”

Until the end of the year, the rate will be the same whether you have an E-ZPass or not. But beginning in January, the rates for those without an EZ Pass may jump by as much as 30%. The Thruway Authority has proposed the fee increase, but it is still subject to public hearings and has not yet been finalized.

The passes are available at all Thruway service plazas, Department of Motor Vehicle offices, and some retailers.

Even after the switch is made to electronic tolling, the toll booths themselves won’t be going away fully for at least another year. The Thruway Authority says it will take until at least through 2021 to remove all of the 54 remaining structures.