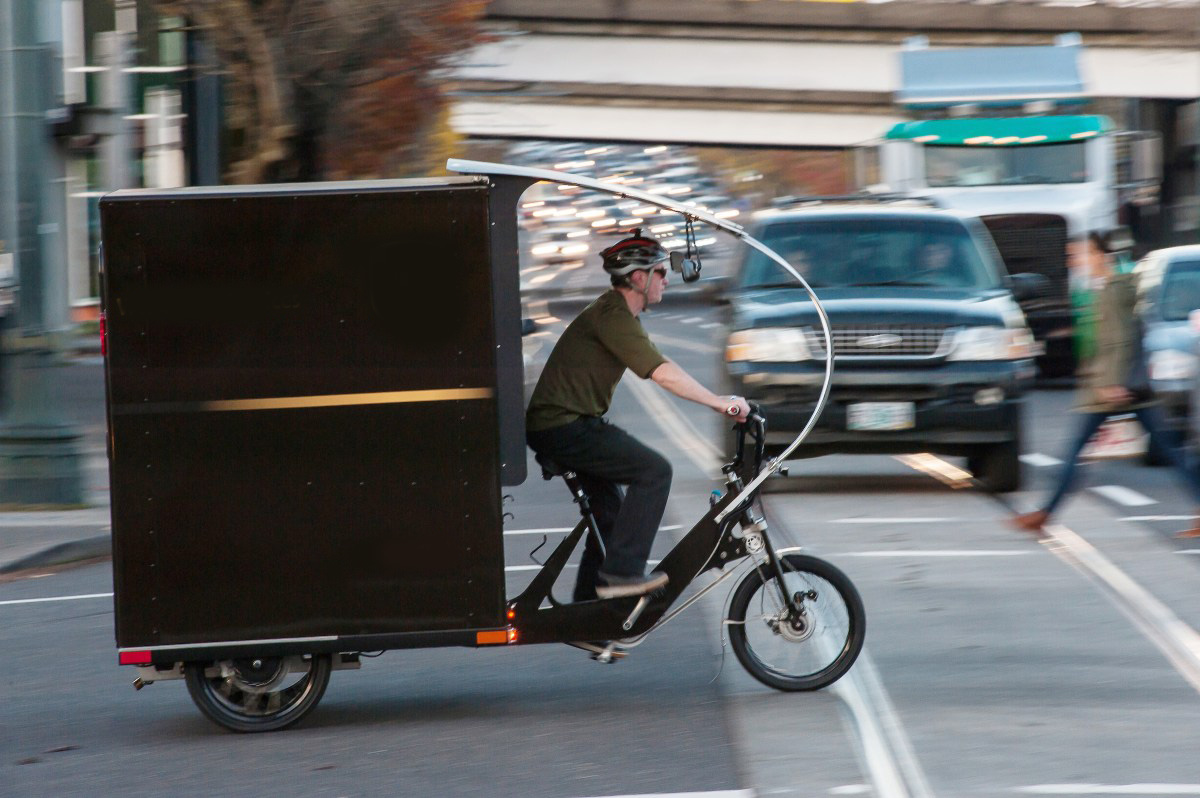 Mayor Bill de Blasio announced in November that New York City will launch an initiative to encourage freight companies to reduce delivery-related congestion through the use of cargo bicycles. The Commercial Cargo Bike Program is expected to reduce traffic by bringing an estimated 100 cargo bikes from major delivery companies to the city’s most crowded streets in midtown and downtown Manhattan.

Mayor de Blasio said: “This is an exciting new program that will help cut congestion on our streets and speed up deliveries, all while reducing vehicle emissions.”

“DOT is excited to announce this pilot to make freight deliveries in NYC safer and greener by encouraging the use of pedal-assist cargo bikes instead of trucks,” said NYC DOT Commissioner Polly Trottenberg, who also pointed out that trucks are involved in a “disproportionately high number of cyclist fatalities” in NYC.

The program’s goal is to better understand whether cargo bicycles can successfully fit into the City’s streetscape. Companies participating will monitor and send data to DOT about the speed, parking, use of bike lanes and size of the cargo bicycles. DOT will use the information to consider adjustments of its rules regarding cargo bicycle speeds, parking rates and size.

The focus area of the program is Manhattan south of 60th Street – the same area to be covered by Central Business District Tolling starting in 2021 – with the potential to expand depending on initial results. Cargo bikes are permitted on city streets, but the new program clarifies the operating parameters for cargo bikes used for commercial purposes. DOT is coordinating with NYPD regarding monitoring and enforcement protocols.

UPS, DHL and Amazon have already said they will participate in the program, but any freight company can get involved. They just need to abide by the following:

The program will initially be six months and may be extended for additional six-month increments, depending on the results. Companies interested in participating should contact NYC DOT at Freightmobility@dot.nyc.gov.

The de Blasio Administration has introduced a number of recent initiatives aimed at reducing congestion and improving commutes. In 2019, DOT announced expansion of its Off Hours Deliveries program, encouraging businesses to move deliveries to overnight hours. As part of the Administration’s Better Buses plan, DOT has worked with MTA on improvements to several major bus routes, including the creation of the first-ever “busway” along Manhattan’s 14th Street. The NYPD has also announced units dedicated to increased bus-lane enforcement.

“Over 2 million deliveries are made in NYC daily. That’s about a million freight trips per day passing through the five boroughs and that number is only expected to increase,” said City Council Speaker Corey Johnson. “There’s no doubt the rise in deliveries has caused chaos on our streets. I’m excited to see DOT exploring this new technology.”

“This commercial cargo bike pilot will give us valuable insight into how we can maximize productivity and the use of our streets. Across the City congestion caused by vehicles and trucks has impacted the travel time of all New Yorkers,” said Council Member Ydanis Rodriguez, Chairman of the Transportation Committee.

“Cargo bikes will help shift freight deliveries away from large, dangerous, polluting trucks, and toward smaller, more appropriate vehicles for a dense urban environment. This means more space on our streets and sidewalks for people, and ultimately a better quality of life for all New Yorkers,” said Danny Harris, executive director of Transportation Alternatives.

Source:Office of the Mayor of NYC

The Past, Present & Future of Non-Emergency Medical Transportation:

Defining “Chauffeur,” a Driver’s Role in Security and Child Safety

Business Travel Often an Obstacle for People with Disabilities

Recommend That Passengers Buckle Up, Too